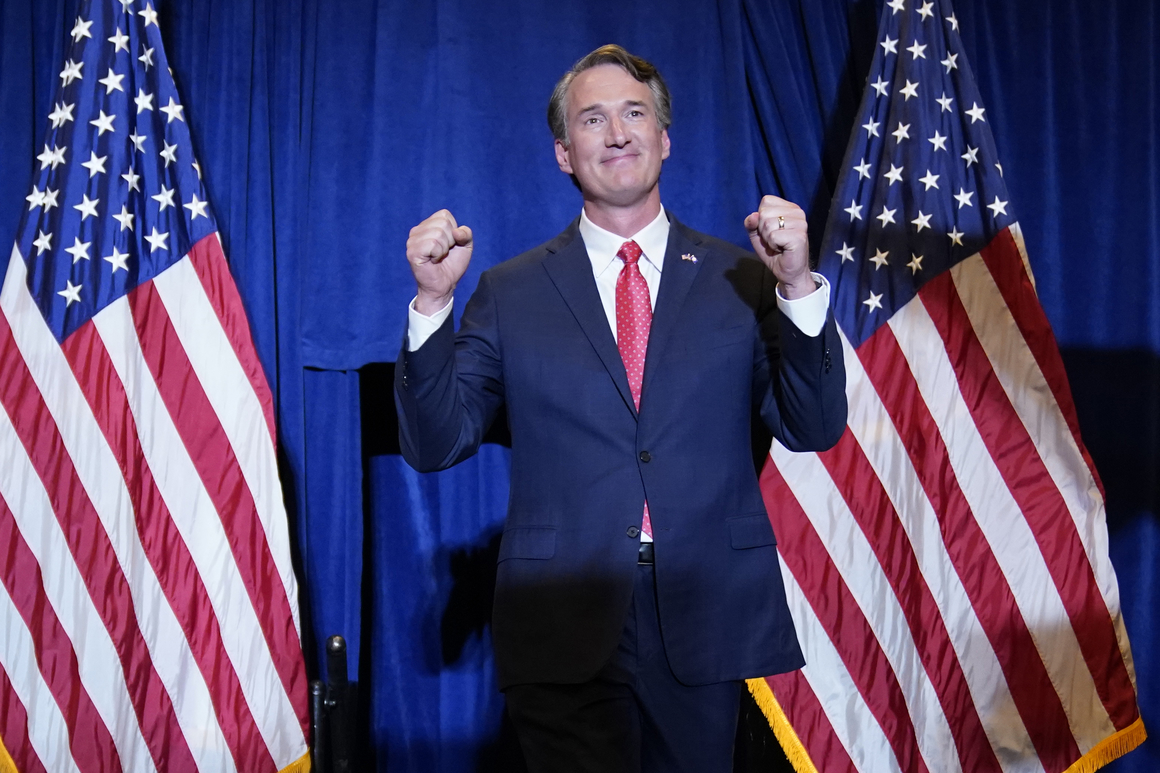 CHANTILLY, Va. — Republican Glenn Youngkin has won the race for governor in Virginia, riding a wave of late momentum to deliver a rebuke of Democratic control in Richmond and Washington.

With more than 94 percent of the expected vote counted, Youngkin has staked out a 3-point lead — a margin that reflects major gains for Youngkin and his party across Virginia and in other states as well. In New Jersey, Democratic Gov. Phil Murphy is locked in an unexpectedly tight race with Republican Jack Ciattarelli.

“Together we will change the trajectory of this commonwealth, and friends, we are going to start that transformation on day one,” Youngkin said in a victory speech early Wednesday morning.

In both states, the Republican candidates not only built further on blowout Republican margins in smaller, rural counties, they also cut into the edge Democrats built in diverse, heavily populated suburbs in recent years. Ciattarelli led Murphy by less than a percentage point at midnight, but with about three-quarters of the expected vote in and votes still outstanding in some heavily Democratic cities.

The results will set off a shockwave not only in Virginia — and possibly New Jersey — but across the country’s political landscape. The big swing that drove Youngkin’s victory is a foreboding sign for Democrats as they prepare to try to hold slim majorities in both the House and the Senate in the midterms. Seven states President Joe Biden won by smaller margins than Virginia will also hold governor’s races next year.

Youngkin’s victory speech reflected the urgency Republicans feel to win back political power: “There is no time to waste,” he said. “Our kids can’t wait. We work in real people time, not government time. So on day one, we’re going to work.”

McAuliffe took the stage at his election night party a little before 10:30 p.m. In a roughly 4-minute speech, McAuliffe thanked his family, staff and supporters but did not concede the race.

“We are going to continue to count the votes,” he said, reminiscing on how much the state has changed since he served as governor last decade. McAuliffe has not publicly commented since media organizations called the race, and representatives of his campaign did not immediately return a request for comment following Youngkin’s projected victory.

The Associated Press has not yet called the two other statewide races in Virginia, but Republicans lead in both: former state legislator Winsome Sears for lieutenant governor and state Del. Jason Miyares for attorney general.

The Virginia Public Access Project also projected that Republicans flipped at least 6 state House seats, regaining control of the lower chamber after Democrats took it over in 2019. Democrats still have their narrow 21-19 majority in the state Senate, whose seats were not up this year.

The race also attracted record turnout across the state. Over 3.2 million Virginians cast a ballot this year, which would make it the highest turnout ever for a Virginia gubernatorial election and put it just shy of turnout in the 2018 midterms.

In the run-up to Tuesday’s election in Virginia, which Biden won by 10 points a year ago, Youngkin has been steadily gaining ground on McAuliffe in public and private polling. That’s despite the state’s overall blue tint — but in line with decades of political history, in which the party that wins the White House in the preceding election almost always loses the next year’s gubernatorial race.

Though it is an election to state office, the race is seen as a key bellwether halfway between Biden’s 2020 victory, and the crucial midterm elections next November. Polls in Virginia and nationally have shown a significant drop in public support for the president, whose party holds only slim majorities in Congress and is defending governorships in swing states in 2022.

Murphy, the New Jersey governor, has been considered a safer bet than Virginia for Democrats but ran into broader backlash than expected. Voters in two House districts in Ohio also chose new members of Congress to replace incumbents who resigned earlier this year, while Democrats competed in a congressional primary in South Florida as well. And a number of cities, including New York, are picking new mayors on Tuesday. Democrat Eric Adams won New York City’s mayoral race, The Associated Press projected.

“I am running against, I like to say, Donald Trump in khakis or sweater vests,” McAuliffe told a crowd at a Richmond brewery on Monday, his second-to-last stop of the campaign.

And while Trump endorsed Youngkin, he never physically appeared in the state on behalf of Youngkin, as the candidate tried to walk a delicate line of hanging on to and energizing the former president’s most ardent supporters — while not spooking the large swath of suburbanites who fled the party in great numbers during Trump’s tenure in the White House.

The closest Trump came to appearing in the state was a brief tele-rally into which he dialed on Monday evening, which Youngkin did not attend — part of a “heads I win, tails you lose” strategy for the former president — after teasing a potential in-person visit last week.

Nevertheless, Trump declared victory in the state, both for himself and for Youngkin. “I would like to thank my BASE for coming out in force and voting for Glenn Youngkin,” the former president said in a statement hours before media outlets declared a winner. “Without you, he would not have been close to winning.”

Youngkin, meanwhile, has steered clear of Trump on the trail. At one of his final rallies on Monday at an airport on the border of the city of Richmond and the county of Chesterfield, an ancestrally Republican area that Biden carried in 2020, former President George W. Bush and his famous line on the “soft bigotry of low expectations” got a shoutout during an extended riff on education — but Trump went unmentioned.

That push on education, along with a focus on the economy and crime, has been the centerpiece of Youngkin’s campaign. He has cast himself as a bulwark against “critical race theory” — a legal theory that has become a catch-all for conservatives for how race is taught in school — pledged to raise academic standards and promised to support a push for more charter schools in the state.

“Virginians [are] pushing back on this culture that wants us to shelve hope, that tells our children they have to accept low standards,” Youngkin said in a campaign speech on Monday. “This is a moment for Virginans to push back on this left liberal progressive agenda and take our commonwealth back.”

Supporters were still waving “Parents for Youngkin” signs at the Youngkin election night event, which started as a chatty gathering of campaign staffers and volunteers from across the state and then became a celebration.

A bit under 1.2 million voters cast ballots early or by mail before the election, according to data from the Virginia Public Access Project, a dramatic increase from the roughly 196,000 who did so in 2017, the last gubernatorial election under the old election rules. (It pales in comparison to the 2.8 million who voted early or via the mail during the 2020 election, the first election the options were available.)