Friday morning at Liberty University, the Christian school Jerry Falwell Jr. ran until scandals forced him out, the more than 100,000 students enrolled at the conservative bastion in Lynchburg, Virginia, will listen to a convocation address about the importance in leadership of “character, integrity and morality”—delivered by a trusted lieutenant of Barack Obama.

Jeh Johnson, the Secretary of the Department of Homeland Security for the last three years of the last administration, is the featured speaker, setting up an unlikely show of comity in the homestretch of one of the most consequential and bitterly partisan elections in American history. His speech, a draft of which Johnson shared exclusively with me, comes on the 19th anniversary of the terrorist attacks that briefly roused a semblance of national unity before exacerbating longtime fault lines. And it’s happening notably at a place that’s been rocked of late by a series of tawdry revelations that added up to impel the resignation of Liberty’s Donald Trump-devoted now-ex-president.

Johnson, who turns 63 Friday, is a descendant of slaves buried six or so miles from the campus in Lynchburg. Beyond the affecting tug of those local roots, Johnson told me he wanted to give this talk, and specifically at Liberty, for the same reason he’s made it a point over the years to go on not just MSNBC but Fox News as well.

“Blue just can’t talk to blue, and red just can’t talk to red,” he said. “I believe strongly that you’re never going to get anywhere in shaping people’s opinions if you’re talking only to an audience that always already agrees with you.”

His speech, which follows disclosures on Wednesday that President Trump lied to the American public about the extent of the threat of the coronavirus, sounds like it could have been written yesterday. But it was written last month and recorded last week during a day-long visit to Liberty and now will be shown in a video presentation that all students are required to watch. Johnson is set to outline qualities he considers necessary for able leadership while also lamenting our evidently diminished expectations of the people we have chosen as standard-bearers. 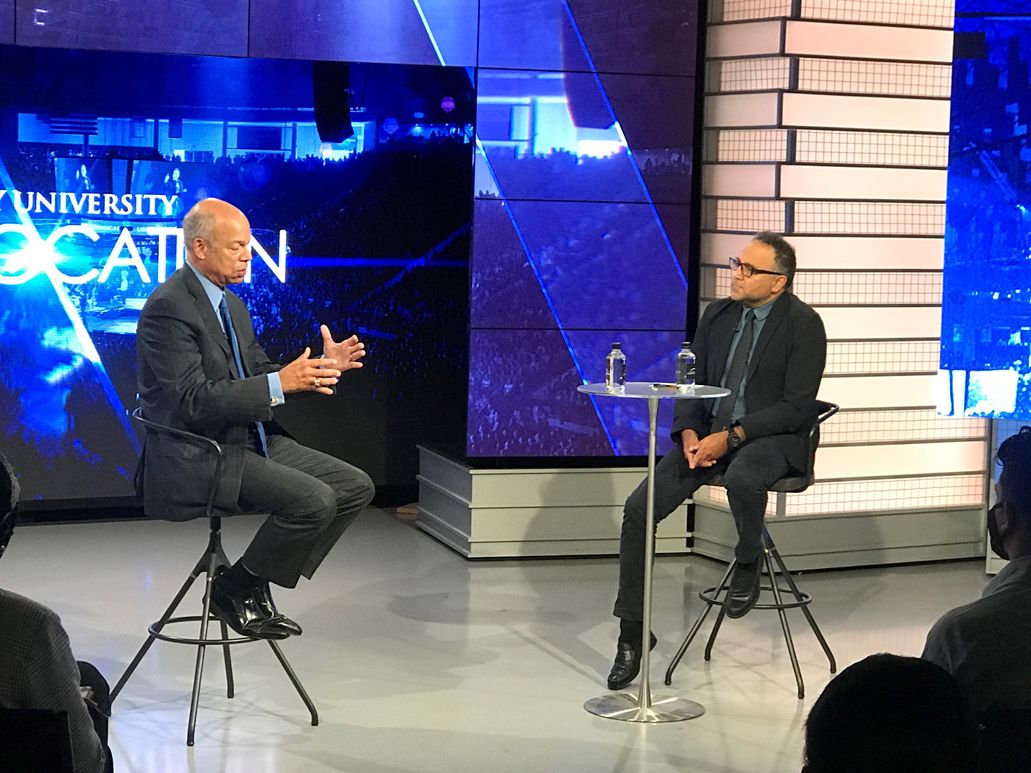 “We no longer expect our political leaders to tell us the truth,” he will say. “We no longer expert our political leaders to play by the rules. Our expectations of our political leaders have sunk so low we now accept from them personal behavior that would be unacceptable for our children, our students, our employees, or cadets, soldiers, sailors, airmen or marines under our military command.” He will say that “leaders too often seek to gain attention by pandering to our fears, our suspicions and our prejudices.” He will cite the Golden Rule: “Treat others as you would have them treat you. Treat others as you would have them treat your wife, your husband, your parents, or your children.”

“I wanted,” he told me, “to give that speech for some time now.” And he called Liberty “the perfect venue” because he believed it “would resonate with people of faith.”

Robert Hurt, the former Republican congressman from Virginia who’s now a dean at Liberty’s Helms School of Government, when we talked the other day described Johnson as “a patriot.”

“A Homeland Security secretary who wants to give a talk on leadership?” Hurt said. “We love it. And I would like to say his message is exactly what we want our students to hear, and they need to hear it.”

I asked Hurt if he thought students might hear in Johnson’s words a tacit rebuke of Falwell and Trump. “I’m not going to characterize the leadership styles of other, you know, current and former leaders,” he said. “But my job as the dean of this school of government, and as a part of this Liberty team, is to bring to the students these kinds of opportunities. And then the students are smart enough to apply what they’ve heard in the way that they see fit.”

It’s definitely what two students I talked to heard.

Joel Thomas, a senior biomedical sciences major from Charlotte, was one of the students in a small question-and-answer session with Johnson and also watched an early cut of the talk—as did third-year law student Andrew Lopiano. “Even though he didn’t specifically say, ‘I’m talking about the president of the United States or the former president here at Liberty,’” Thomas told me, “absolutely that’s something that went through my mind.” He expects many of his fellow students to have a similar sense. “It’s going to really hit home,” Lopiano said.

Might the sprawling Liberty community interpret Johnson’s talk as a subtweet of sorts of Falwell? “I can’t speak for them,” Johnson told me. “I was very upfront from the beginning of our discussions about what I wanted to discuss.”

And might they see it as a condemnation of Trump?

“I’m not naïve,” he said. “Certainly, many people will read it that way.”

Earlier this month, the first time Johnson and I talked, it was hard not to consider the reality that Americans are in this together, in ways that can be uncomfortable, and whether we like it or not.

“My great-great-grandmother was born a slave in Lynchburg,” he said, “spent her entire life in that area, was a nurse, a midwife, and there’s a little excerpt from the local paper when she died—you know, thought well of, worked for rich white families. And she’s buried in an integrated cemetery in Lynchburg called the Old City Cemetery, which is a really beautiful place, but she had no headstone. Her daughter, who was half white, my great-grandmother, is buried there, too. And what’s interesting about that is they’re buried within a stone’s throw of Confederate soldiers.”

Proximity, connectivity, commonality—these were themes Johnson invoked three years back, too, when he and Falwell actually shared airtime on “This Week” on ABC, in August of 2017, in the wake of the deadly rally for white supremacy in Charlottesville.

“Sometimes,” Johnson said during that program, “people have more in common than one might realize. Like Mr. Falwell, I’m an attorney. Like Mr. Falwell’s father, Reverend Falwell, my great-grandfather was a Southern Baptist preacher born in Lynchburg, Virginia. My great-grandfather was born a slave in 1860 in Lynchburg. He was freed by Abraham Lincoln when he was a child. He taught himself to read and write. He put himself through school, and he founded a church called the Lee Street Baptist Church, in Bristol, Virginia, in 1890, which is still there.” Johnson also used the platform to try to speak directly to Trump. “I would encourage him, through his words, to try to … not just speak to his base, but to speak to all of America,” he said. “He’s the president for all of us in this country.”

Last November, Johnson gave a speech to the Lynchburg chapter of the NAACP, and the News & Advance sent a reporter. Hurt read the article. And he contacted Johnson to gauge his interest in coming to talk to students at Liberty. Johnson eagerly accepted an invitation.

But this past spring and summer, after Falwell agitated to reopen the university at the beginning of the pandemic and tweeted racist imagery, Johnson started to have second thoughts. “And so I called Tim Kaine,” Johnson told me, referring to the senator from Virginia who would have been Hillary Clinton’s vice president. Kaine, who confirmed the conversation and the nature of his counsel, told Johnson to go ahead and give the speech. “‘Bernie Sanders has been there. Ted Kennedy’s been there. I’ve been there,’” Johnson said Kaine told him. “And I said, ‘All right. I’m there.’”

He started writing. “And it was one of those speeches I wrote in like an hour. It just rolled right out,” he said.

“I knew what I wanted to say.”

Johnson, who lives in New Jersey, spent the better part of a day at Liberty. He did a Q&A session guided by a pastor with a small group of students, socially distanced and masked. To another collection of law and government students, he gave a lecture on war powers. But the centerpiece of his time on campus was the speech about leadership, which he delivered to a camera in a studio, creating the recording students will see today not in the usual convocation facility due to pandemic-related protocol but by logging on live. His remarks will be accompanied by pictures and information about his family history in the area, and also music he was asked to select—“Every Time I Feel the Spirit,” from which he drew inspiration as an undergrad at Morehouse College in Atlanta.

“It was just a really interesting exercise, you know, crossing the bridge,” Johnson told me. “There was nothing overtly political about the whole visit.”

Except, of course, there was, especially right now. And so Friday at Liberty here’s what they’ll hear. 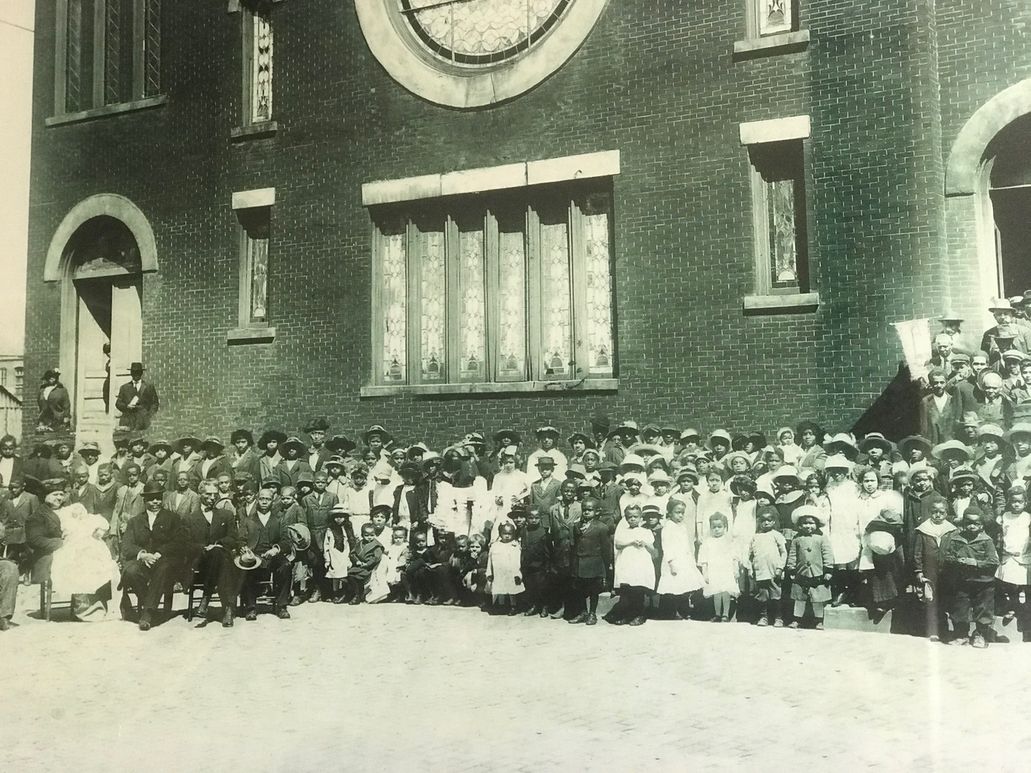 He will say, “Whether you are a pastor, a plant manager, a sales team leader, a police or fire chief, a university president, a commander of soldiers in combat, a mayor, a governor, or a president, it is a sad state of affairs today that the public has come to expect little of our political leaders when it comes to character and morality.”

He will say, “Too often politicians pay no price for a lie, or even a crime. Instead, we conveniently overlook the bad behavior by saying, ‘But I like his policies.’ Or, ‘The economy is doing great.’”

He will say, “Ask any military commander who has led people into battle, and they will tell you that in times of great stress, the poor character of a leader will have a corrosive effect on an entire unit. Character, integrity and morality do matter.”

He will list five traits of a good leader. Tell the truth. Build consensus. Be inclusive. “Never ask someone to do something you wouldn’t do yourself.” And that Golden Rule.

And he will say, “Particularly at this time of heightened racial tension in this country, respect differences among people you meet—cultural, racial, religious, ethnic and political. Recognize that diversity is the opportunity to learn and expand your own horizons. Disrespect for those who are different reflects a small heart and a closed mind.”

I asked Johnson: What hope is there for this message of his?

“I’ve been disappointed a lot lately about our political environment, but it doesn’t mean we shouldn’t try,” he said. “We’re not going to get anywhere unless someone in one camp is willing to pick up his duffel bag and wander into the other camp and bring to that other camp a message they don’t normally hear.”

“What Mr. Johnson was speaking on is something that really cuts to the core,” said Lopiano, the law student, who did his undergrad at the University of South Carolina. “Americans don’t really want to listen to anyone. We kind of just want to prove each other wrong, and that might be a majority of people, and that might be a minority of people, but a lot of people just kind of want to pick a color and cheer. And so having someone from the Obama administration come and talk on leadership …”

“A very needed message, and timely message,” said Thomas, the senior from Charlotte.