The World Trade Organization ruled decisively Tuesday that President Donald Trump violated global trade rules when he unilaterally imposed tariffs on what became more than $350 billion worth of Chinese goods.

The ruling trade body sided against the United States on a number of points, including that the Trump administration did not provide a convincing explanation of why the tariffs were allowed under a provision that lets countries take emergency trade actions “to protect public morals.”

The panel also found that the additional duties Trump imposed on Chinese goods violated the WTO’s key “most-favored nation principle,” which requires the United States and other countries to apply the same tariffs on imports from all other members.

In practical terms, however, the ruling may not have much effect, partly because of counter-tariffs that China has already imposed and a deal the two sides reached.

Rather than acknowledge the defeat, U.S. Trade Representative Robert Lighthizer spun the decision as a validation of Trump’s go-it-alone approach to confronting China, based on the idea WTO rules are not able to control Beijing’s behavior. 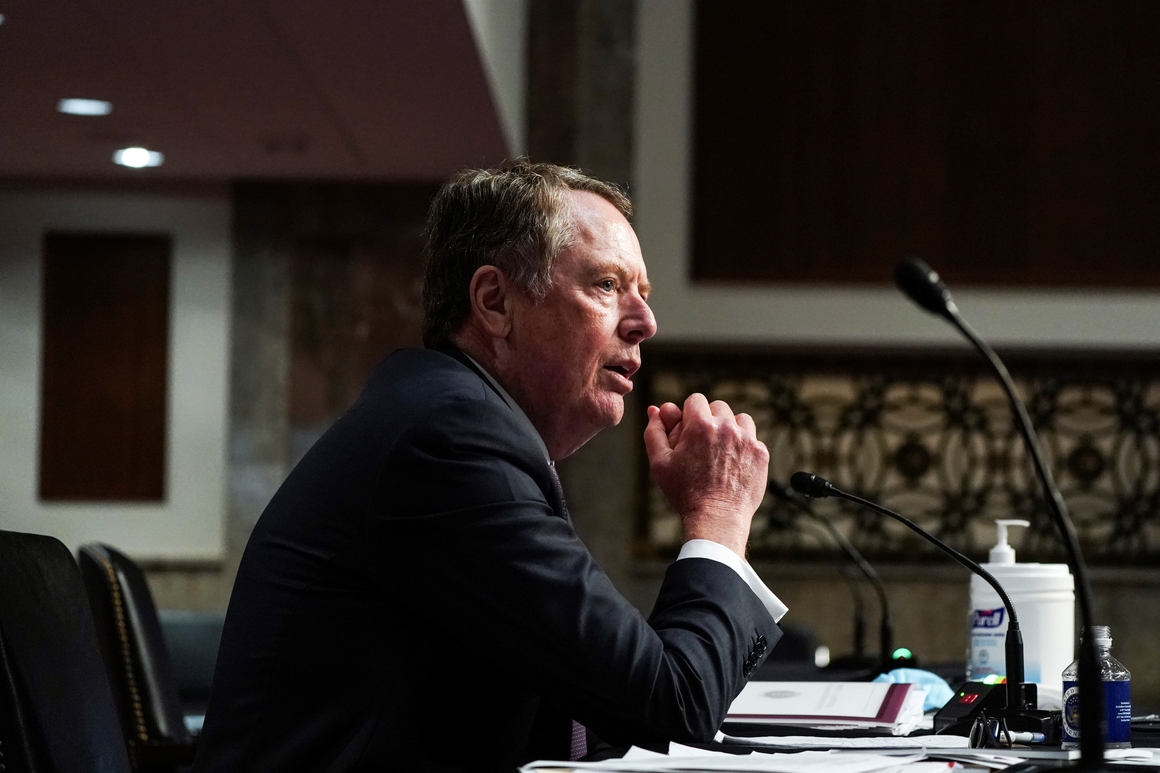 “This panel report confirms what the Trump Administration has been saying for four years: The WTO is completely inadequate to stop China’s harmful technology practices,” Lighthizer said in a statement.

He also stressed the decision “has no effect on the historic Phase One Agreement between the United States and China, which includes new, enforceable commitments by China to prevent the theft of American technology.”

Trump and Lighthizer launched the tariff war because of concerns that Beijing was failing to protect valuable U.S. intellectual property against theft and forced technology transfers.

Instead of following the usual course of filing a dispute at the WTO and winning the right to impose retaliation, the Trump administration took unilateral action on the basis of a U.S. investigation which found Beijing guilty of major failures to protect U.S. intellectual property.

“It comes as no surprise that the United States lost this case in a big way,” Wendy Cutler, a former senior U.S. trade official, said. But the most serious impact “will be further loss of credibility for the WTO, undeniably cast to the sidelines of one of the major trade confrontations In recent years,” she added.

The panel also found that Trump’s move also ran afoul of WTO rules by exceeding the maximum tariffs rates that the United States had pledged it would charge as a member of the organization.

The panel rejected the Trump administration’s argument that the WTO had no reason to rule on the tariffs because the United States had entered into talks with China to resolve the dispute.

But some of the ruling has been muted over the last two years of trade wars between the world’s two largest economies.

First, China has already retaliated on more than $100 billion worth of U.S. exports, which is more or less proportionate to the share of Chinese imports that Trump hit.

Second, the U.S. and China signed a phase one trade deal in January to partially resolve their trade dispute, although most tariffs still remain in place.

Third, the Trump administration has crippled the WTO’s Appellate Body by blocking the appointment of new judges.

That action also prevents the United States from reversing the decision on appeal. But it also blocks a final ruling in the matter, impeding Beijing’s right to win authorization to retaliate further against the U.S. Lighthizer gave no indication of any plans to appeal in his statement.

“The only immediate consequence would be if Trump used this as an excuse to pull out of the WTO,” said Bill Reinsch, a trade policy specialist at the Center for Strategic and International Studies. “That would be an economic and political mistake, and I imagine Lighthizer would advise against it, arguing that we can keep on doing what we’re doing anyway. But with Trump you never know.”

Trump initially imposed tariffs on $50 billion worth of Chinese goods in 2018, in separate batches of $34 billion and $16 billion.

After Beijing retaliated in response to those duties, it started a tit-for-tat trade war affecting more and more goods on both sides of the Pacific.

China challenged the initial batch of duties at the WTO in July 2018 and filed two additional cases in August 2018 and September 2019 in response to Trump’s moves. The ruling on Tuesday stems from the first case.