BETHESDA, Md. — They came from all over the country, determined to help their stricken president recover.

Some had homemade signs, others held “GET WELL” balloons and dozens brought bouquets to lay in front of Walter Reed National Military Medical Center, where President Donald Trump has been combating his own coronavirus infection since Friday.

By Sunday afternoon, hundreds of people had congregated outside the hospital. They handed out water and candy and stacks of pizza the Trump campaign sent over. They flew every brand of MAGA flag in the sky — the most devoted carried 20-foot pipes with four flags apiece mounted on them — marching them up and down the sidewalks. “YMCA” and “Proud to Be an American,” both Trump rally staples, blared on repeat on boomboxes and generator-powered amps.

MAGA Country had gathered to celebrate and pray for their leader — an impromptu festival-meets-vigil for its venerated, living saint.

And then suddenly, there he was. After hours of listening to their cheers and acknowledging them via tweet, Trump emerged from his isolation chamber to greet the crowd, creating his own impromptu spectacle. In a brief appearance, Trump rolled past in his motorcade, waving from the window of his massive armored SUV, offering blessings from a hermetically-sealed Popemobile.

The gathering was, in a way, the spiritual center of Trump’s rattled base. Across the country, religious leaders had called on the country to pray for the president and Trump surrogates organized a candlelight vigil on Saturday night. On Fox News, Trump’s favorite hosts were vowing to fight for Trump, because “you fought for us,” as Laura Ingraham put it. Those strains were all present outside Walter Reed on Sunday, where a community that had regularly downplayed the pandemic’s severity, and shrugged off social distancing and mask wearing were now grappling with the reality that the 74-year-old president was now seriously ill, caught by that same pandemic.

As the crowd grew larger and louder on Sunday, police put up barricades trying to contain the crowds from spilling into the streets. Ad hoc caravans drove up and down, honking their horns in jubilant support. Social distancing seemed a distant concern, secondary only to the camaraderie and joy of supporting their convalescent leader — often maskless, often yelling over the din of cars into the ears of their newfound friends.

Tamara, a nurse from North Carolina in a star-spangled MAGA hat who declined to give her last name, had driven five hours that morning to keep vigil for a short while with her teenage daughter and small dog. She had to drive the five hours back home that night so she could make her shift the next morning.

“I feel that there’s more power in prayer, to be honest,” she said, trying to keep a giant homemade “WE HEART TRUMP” sign from flying off a barricade. “So I wanted to come here and be with people and actually be near him as much as possible to pray for him.”

In the days since Trump’s diagnosis was announced — and in the endless hours that he was silent online — Trump’s followers and allies, both online and in the media, have pinned their hopes on his well-cultivated image of robust health and spiritual fortitude. A full recovery from the coronavirus — which has killed over 200,000 Americans — would only bolster that image and, his supporters hope, help him win the election.

But for a certain brand of Trump fan, a little display of devotion didn’t seem to hurt. Across the country, Trump supporters organized candlelit vigils in front of Trump properties and hosted prayer events. Thousands and thousands of supporters posted their prayers online, and on Fox News, pundits praised his bravery. 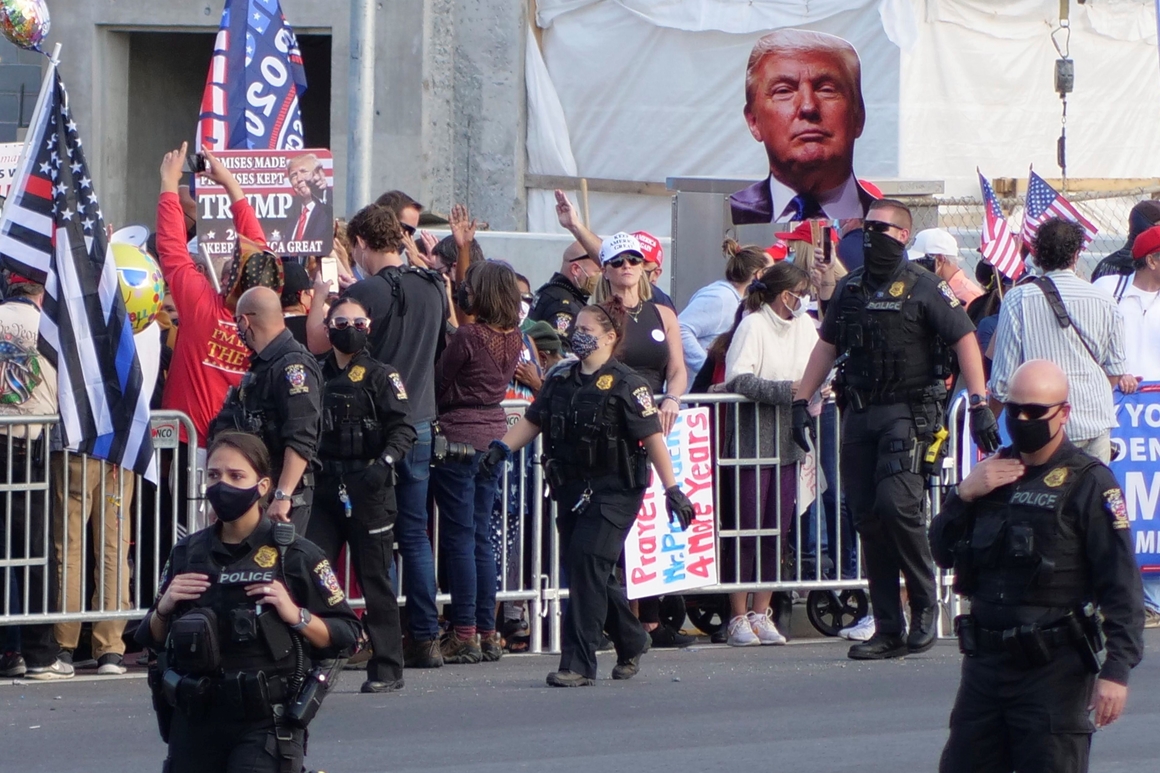 “I’m here to pray for Trump,” said an elderly Vietnamese woman who declined to give her name. She was holding a massive shofar — a ram’s horn used in Jewish religious ceremonies — that she blew repeatedly, calling others to prayer.

John, a vendor selling MAGA merchandise out of a shopping cart — flags, hats, masks — said he had driven down from Connecticut that morning. John, who declined to give his last name, said his company often set up shop at Trump rallies and voter events. The atmosphere on Sunday, he said, was no different. “These people are just as enthused as they are at regular Trump rallies,” he said, as a Trumpified cover of “YMCA” blasted nearby: “M! A! G-A!”

Here and there, a strain of religious fervor shot through the crowd.

“Trump was sent from God!” declared one handwritten poster, mounted on the fence outside the Naval Center on the Walter Reed complex. QAnon adherents — the mushrooming conspiracy that Trump is on the verge of purging Satan-worshiping pedophiles from the government — made their presence known, holding signs with giant Qs. On their windshields, some had the secret hashtag, #WWG1WGA, which stands for the phrase: “Where we go one, we go all” — something of a QAnon motto and pledge.

Matthew Curtis, an ex-Californian who expressed disgust at how liberals have governed his home state, had come up from Tennessee on Saturday for a rally for former Democrats who had left the party, dubbed the “Walk Away” rally.

“Since I’m here, you know, I felt compelled to come and show my support for President Trump and pray over him and wish him a speedy recovery,” he said.

In quieter times, the boulevards surrounding Walter Reed — normally choked with commuters working at the Naval base and the National Institutes of Health — would be empty on a Sunday. But this day, the streets were flooded with pro-Trump cars, from regular vehicles that had plastered “TRUMP-PENCE” flags onto their windows, to the magnificent red “TRUMP TRAIN” truck that circled Walter Reed all day, to the flag-festooned firetruck with a chimney pumping clouds of bubbles into the air.

Occasionally, an SUV would zoom by with a middle finger held aloft through the sunroof. But Hunt McMahon, a local who frequently attended grassroots Trump events, said it was exceedingly rare.

“It’s easily 10 to one” in favor of Trump-supporting drivers, he said, holding a megaphone in one hand and a five-foot-wide “TRUMP-PENCE” flag in the other. “People have their opinions and flip us off and make rude comments. But there’s exponentially more people coming by and waving and honking and cheering and giving us a thumbs up.”

McMahon hoped that the crowd’s presence would inspire Trump supporters in the Democratic stronghold of Bethesda, Md., where the medical facility is based, to openly display their colors.

“Showing support for your president can get you vandalized, or your windows smashed on your cars, or worse,” he said. “And there’s nothing right about that. So we’re all out here to let people know, it’s okay. We’re supporting the president.”

Curtis had come by himself, and he knew nobody, but he didn’t feel alone.

“It’s really good to be in such a liberal Democratically controlled area, with a lot of like-minded individuals,” he said. “People are wanting to show their support in the midst of adversity.”

As the sun set and night descended and the president was safely ensconced back in Walter Reed, the crowd remained, arrayed stubbornly in front of the gates and under the eye of the local police. They hung onto the barriers, eating more campaign-gifted pizza, and watching flag-bearing trucks loop around and around the plaza.

They waited for Trump’s next move.