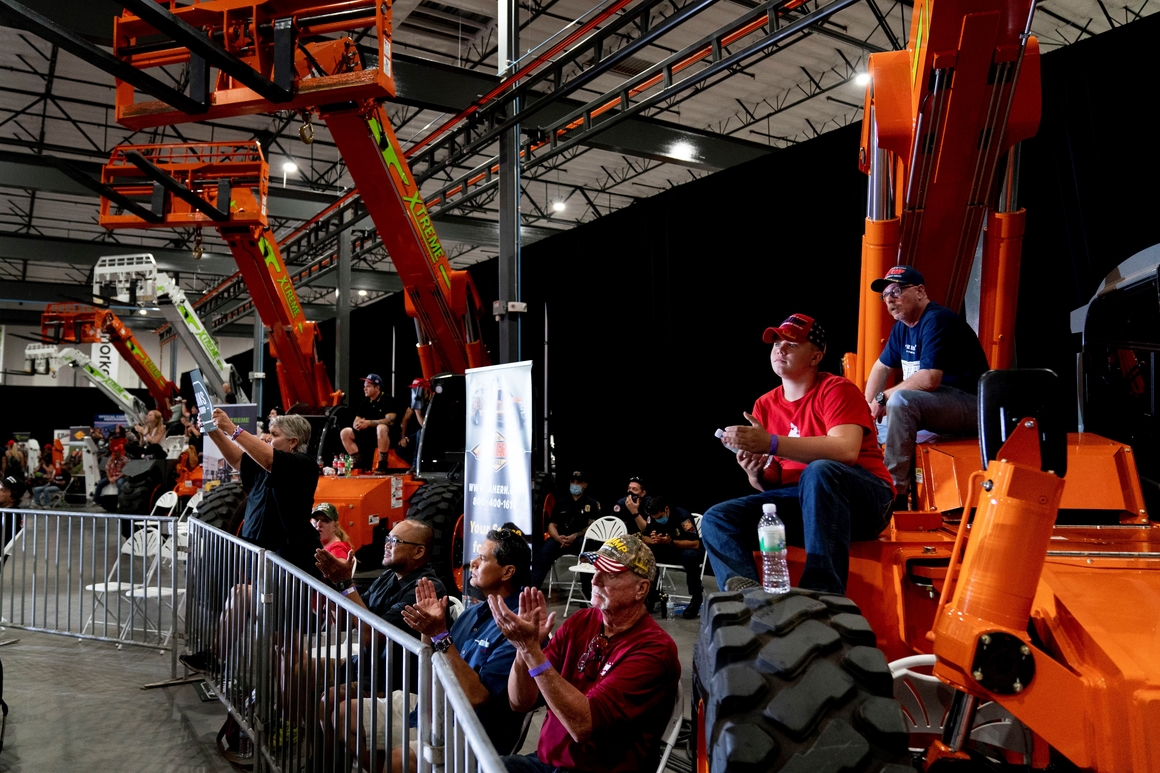 Four years after he won the Midwest by vowing to revitalize the U.S. manufacturing workforce, President Donald Trump is campaigning for reelection on a job well done. The numbers tell a different story.

Trump’s anti-trade agenda and a pandemic-induced recession have combined to shutter factories and accelerate decades-old trends toward automation, eliminating hundreds of thousands of manufacturing jobs, many for good, including in the Rust Belt states he needs to win in November.

The president’s path to the Oval Office was paved by his victory in this factory-intense region, where a downturn in manufacturing that began in 2015 opened the door for him to appeal to demoralized blue-collar voters.

But the White House’s trade wars kicked the sector into another slump in 2019, with Michigan, Ohio, Indiana, Wisconsin, Minnesota and Pennsylvania facing declines or plateaus in manufacturing employment even back in February — well before Covid-19 forced layoffs at dozens of plants. As of July — the most recent month for which data is available — each state is down between 20,000 and 40,000 workers from pre-pandemic levels.

That record presents a particularly daunting challenge for Trump to replicate his stunning victory of 2016 as he struggles to overtake Democrat Joe Biden, who appeals more to Midwestern voters than Hillary Clinton did four years ago.

Yet the president is framing his policies as an unmitigated success.

“You better vote for me, I got you so many damn car plants,” Trump said during a Sept. 10 rally in Michigan. “And we’re going to bring you a lot more.”

He had a similar upbeat message for Ohio.

The trend is mirrored nationwide. Manufacturing across the U.S. is still down 720,000 workers from February despite gaining 29,000 jobs in August, with the pandemic more than wiping out the overall modest gains of 500,000 from Trump’s first three years in office — about the same pace of growth as under President Barack Obama. It was not an improvement over prior years — nor did it manage to restore more than a fraction of the jobs lost in the previous decade, according to an August analysis by the Economic Policy Institute.

A Bureau of Labor Statistics analysis released Sept. 1 said that even pre-pandemic, the sector was on track to lose nearly 450,000 workers by 2029, the most of any area of the economy. At the same time, output has made a notable recovery due to increased automation, with the industrial production index bouncing back to almost 98 in July — less than 10 points down from February.

That disparity means that many of the losses are likely permanent, economists say.

“Trump has been all in on this huge resurgence of manufacturing employment, and that has not materialized,” said Mark Muro, an economist at the Brookings Institution. “Productivity-enhancing technology, such as robotics, and then international competition: To me, that’s a recipe for continued downward pressure on employment. I don’t think mass employment is likely to return.”

Manufacturing is hit hard by any recession, but Covid-19 presented unique issues. Few factory jobs can be performed from home, meaning that these workers were some of the first to be furloughed or laid off as the production lines shut down.

While economic downturns typically spur employers to turn away from physical labor and toward automation, the social distancing required by Covid-19 was an extra motivator. Combine that with advanced technology — along with historically low interest rates to make it cheaper to purchase it — and the move was a no-brainer for many manufacturers.

“In recessions of any kind, automation is accelerated because paying workers just becomes more expensive,” Muro said. “Meanwhile, technology and automation has improved and gotten cheaper so it’s easily used.”

More than half of U.S. companies report being more willing to invest in automation as a result of the pandemic, a July survey by Honeywell Intelligrated found. Tyson is shifting to robotic butchers; BMW is implementing artificial intelligence quality control. As of May, sourcing for automation equipment was up nearly 150 percent year-over-year, and up over 20 percent from last quarter.

Long before Trump took office, the U.S. was already well on its way to becoming more efficient at manufacturing with fewer workers. Over the last three decades, output has grown even as employment has declined.

“The fact which gets lost in some of the discussion is that in and of itself, that improvement in productivity — making more stuff per unit of labor input — is a good thing,” said Jeffrey Miron, an economist at the libertarian Cato Institute.

But it also leads to the displacement of workers, and when Trump moved to impose tariffs on Chinese steel, aluminum and other products, that only served to accelerate the effect, economists say. Higher prices for imports have decreased demand, which — when combined with a global economic slowdown — contributed to depress manufacturing employment. On top of that, American exporters are hurt by retaliatory tariffs imposed by other countries.

“A couple of things have played into the manufacturing job losses: One is trade,” said Michael Hicks, an economist at Ball State University who studies manufacturing. “The second, and the bigger effect, really, is the productivity growth of American manufacturing.”

Trump’s reelection campaign maintains that he has bolstered the manufacturing sector during his time in office, pointing to the hundreds of thousands of manufacturing jobs that were added pre-pandemic.

Trump “talked a lot about manufacturing, but the policies he engaged in were predictably damaging to manufacturing,” Hicks said. “As a result of the tariffs his administration imposed, “people buy less [manufactured goods], and if they buy less of them, that causes lower demand for employment.”

Whether Trump wins reelection come November — and is free to continue his trade wars — could have an outsize impact on the U.S. manufacturing workforce, particularly given the sector’s relatively modest job gains since February.

“The returns from layoffs are probably over,” Hicks said. “And so if that’s the case, if we see a second term of the Trump presidency, I would expect manufacturing employment to not be able to crawl back to what it was at the end of the Obama administration.”

When workers lose their jobs in manufacturing, they are most likely to be rehired in the service industry, economists say. It’s often lower-skilled workers who are the first to go, particularly when displaced by automation — and when they do, low levels of education and barriers to relocation mean that they typically end up working in restaurants.

“For 30 years, manufacturing workers have been continually dislocated by robotics and wind up working in service jobs, or moving into nonparticipation,” Muro said. ”The older they were at the time of dislocation, the less likely they have been to rejoin the workforce.”

Between 2000 and February 2020, manufacturing lost about 5 million jobs. Over the same time period, the food services industry gained roughly the same amount, per Labor Department statistics.

“The slide, if people leave that industry, seems to be that they don’t end up in some other high-wage industry,” Spriggs said.