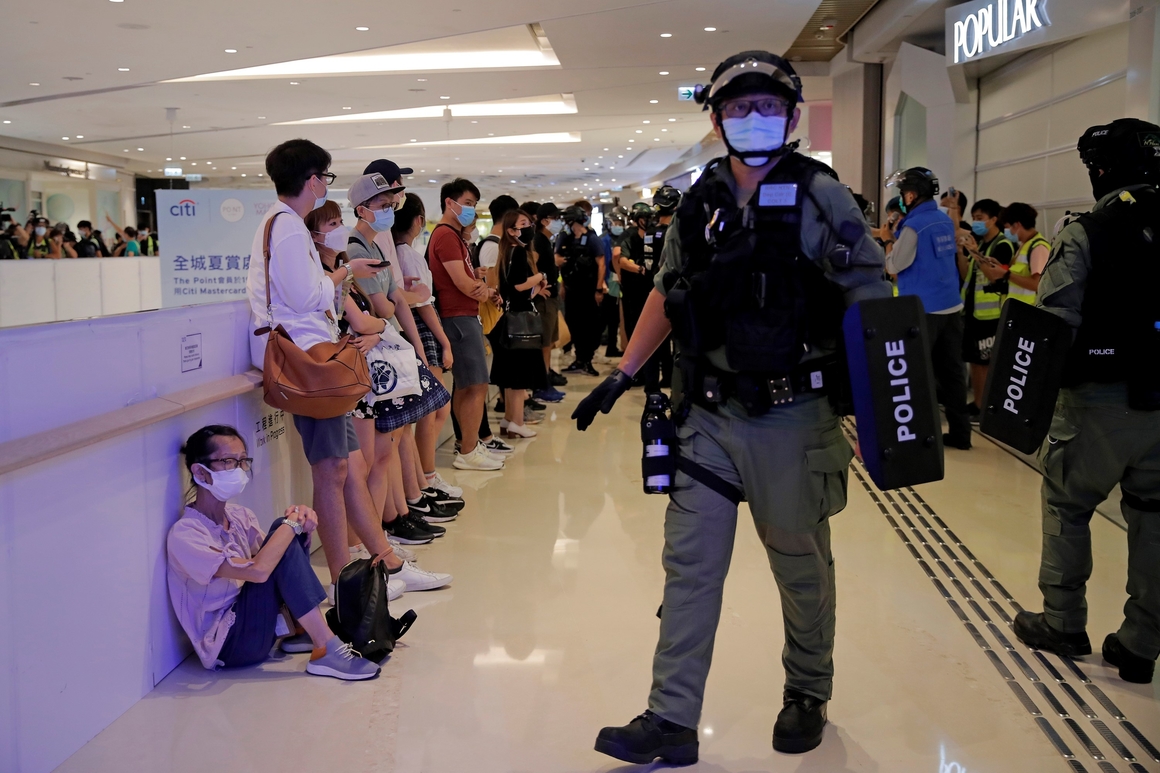 In January, President Donald Trump declared that America’s relationship with China “might be the best it’s been in a long, long time,” praising Chinese President Xi Jinping weeks after inking a first-step trade deal with the country.

Flash forward to July: Trump has effectively cut off trade talks, sanctioned Chinese officials over their internment of Muslims and encroachment in Hong Kong, revealed plans to axe visas for some Chinese students in the U.S., restricted Chinese journalists and vowed retaliation for Beijing’s handling of the coronavirus after initially praising its efforts.

As for Trump and Xi? They haven’t spoken since March.

The reason for the dramatic about-face is partly grounded in recent developments — the Hong Kong sanctions, for instance, are tied to a controversial national security law that recently went into effect. But Trump is also eager to appear tough on China heading into his reelection campaign, where he is polling well behind presumptive 2020 rival Joe Biden, who is hammering the president for his past admiration of Xi and recently unveiled plans to invest in American manufacturing and combat China’s economic practices.

In response, Trump’s tough-on-China campaign has picked up pace. In the last two weeks, his administration has used a variety of methods — press conferences, new legal judgments, numerous op-eds, high-profile speeches, overseas trips — to suddenly hit Beijing over long-standing issues the president often skirted in the past.

“It’s only gotten worse for China in polls,” said John McLaughlin, a Trump pollster. “People always saw China as an economic adversary that stole our jobs, but now they see China as a security threat.”

Trump and his administration have long bludgeoned China over specific issues. The reality TV star relentlessly talked about the country’s trade practices on the campaign trail in 2016 and his Cabinet has regularly warned that the country is trying to force technology companies to hand over data. But the president has always balanced these admonitions with ample praise of Xi himself, at times largely side-stepping human rights concerns, such as Beijing’s infringement on Hong Kong’s separate legal system and its detention of Uighur Muslims, an ethnic minority group.

In recent weeks, however, the tone has changed. And in the last two weeks, the speed and variety of punishments targeting China has accelerated.

Trump has started spouting off on China unprompted, making sure to regularly blame it for the coronavirus outbreak that turned into a world-changing pandemic. And at a press conference last week, Trump announced new sanctions over Hong Kong after Beijing gave itself broad authority to crack down on political dissent in the region, a move that threatens Hong Kong’s independent judiciary. Trump also said he would strip Hong Kong of its preferential trade status over the issue.

Around the same time, Secretary of State Mike Pompeo declared that China’s expansive territorial claims in the South China Sea were “completely unlawful,” a sudden announcement that came four years after an international tribunal had already made the same conclusion. Two days later, Pompeo also revealed the U.S. would restrict visas for employees of Chinese technology companies that he said assisted in alleged Beijing human rights abuses.

Abroad, the administration made a show of its message. Trump’s national security adviser Robert O’Brien traveled to Europe last week to meet with his counterparts, and signaled that a priority would be the Trump administration’s opposition to Huawei, a Chinese telecom firm vying for contracts to build out 5G networks around the world. The Trump administration has already helped coerce one ally, the United Kingdom, into barring Huawei from its 5G network. Pompeo similarly left for the U.K. and Denmark on Monday, where he planned to discuss “China’s threat to free peoples around the world,” according to the State Department.

The Pentagon is even making “adjustments” to shift focus to China, Defense Secretary Mark Esper said Tuesday on a Zoom call with the International Institute for Strategic Studies.

“While we hope the [Chinese Communist Party] will change its ways, we must be prepared for the alternative,” he added. 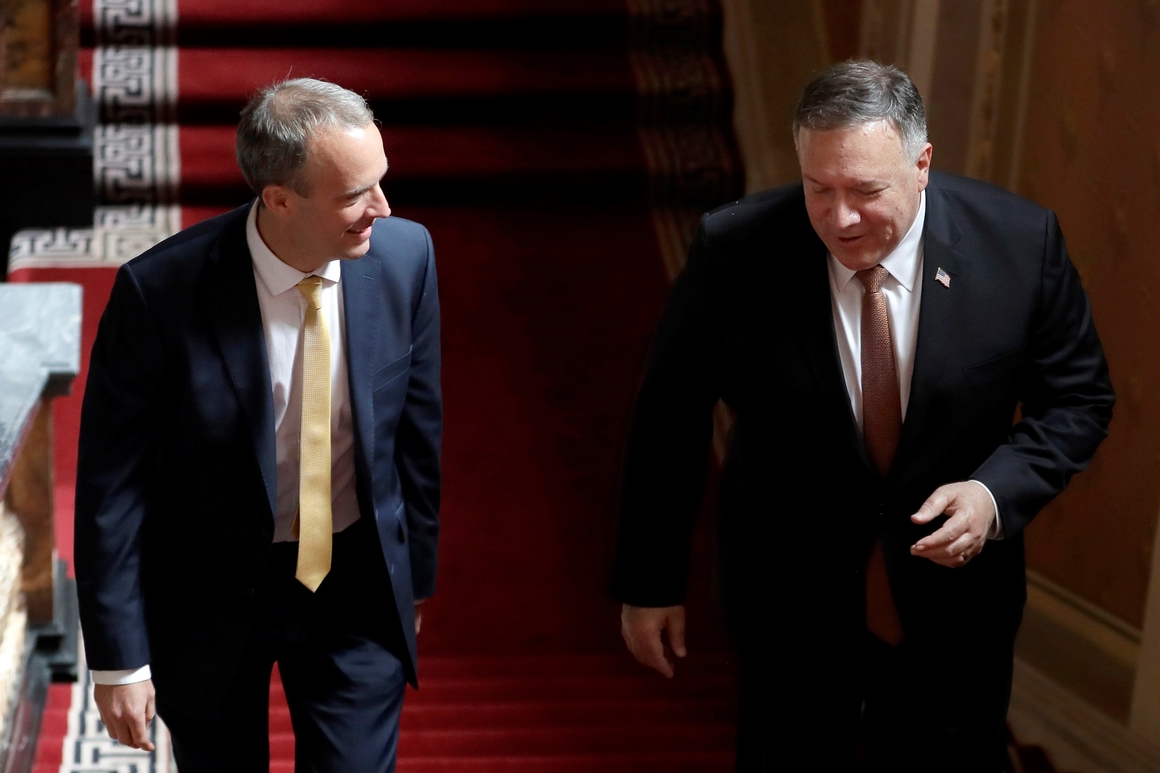 At home, Attorney General William Barr has tailored the anti-China message for American tech firms. Last week, he gave a blistering speech accusing companies like Google, Microsoft, Yahoo and Apple of being too cozy with Chinese government leaders and warning of penalties for executives for advocate for Beijing’s interests. On Tuesday, the Justice Department charged two Chinese men with hacking scores of U.S. companies, including several researching the coronavirus.

Later this week, Pompeo will give his own high-profile speech, delivering remarks to commemorate the 50th anniversary of President Richard Nixon’s historic trip to China, which paved the way for normalized relations between the two countries. But the theme will not be reconciliation. It will focus on “Communist China and the future of the free world,” according to the State Department.

A senior administration official called the speeches “unprecedented,” adding that they are “a call to action for business leaders, allies and partners.”

The campaign comes at a time when Trump is trying to shore up support amid sagging poll numbers over his handling of the coronavirus — only 38 percent approved in a recent ABC News/Washington Post poll. More broadly, five consecutive high-quality national polls have shown Biden ahead of Trump by 10 percentage points or more.

Going after China plays well among key groups of Trump backers. For instance, evangelical leaders — who helped carry Trump into the White House in 2016 — have been clamoring for months for Trump to punish Beijing over its handling of the coronavirus. Barr’s speech, in particular, got positive reviews from Lou Dobbs, one of Trump’s favored cable pundits. But Dobbs warned that the administration has to do more than talk.

“It’s a powerful speech, but now it has to be backed up with action,” Dobbs said last Wednesday on his Fox Business show. “And therein lies the dilemma. So much rhetoric, so many speeches, so many promises from the Department of Justice, from the Department of Homeland Security and, indeed, from our Department of Defense. I get the feeling sometimes they’re inert organizations that have no plan whatsoever to actually move to action.”

The New York Times separately reported that the administration has drafted an order to ban members of the Chinese Communist Party and their families from traveling to the U.S. — a potential dramatic move that some experts estimate could bar roughly 10 percent of the Chinese population from American soil.

“Politics sets the stage for people who want to really take a harder line on policy, particularly because the president isn’t looking for any deals with Xi Jinping right now and he is extremely angry about Covid-19,” said Dan Blumenthal, the director of Asian studies at the conservative American Enterprise Institute think tank.

“A lot of policies China hawks have been advocating for a while are now finally being enacted,” Blumenthal added, “from the administration going after Huawei to frustration with certain U.S. companies in terms of perceived coziness, and the position on the South China Seas is a long time coming.”

The president’s anger at China has been apparent in his recent public appearances. With TV cameras and reporters in the Oval Office on Monday for a meeting about coronavirus relief negotiations, the president jumped in, unprompted, to criticize China.

Trump on Tuesday chided China again during a press conference at the White House, repeatedly using the term “China virus.”

But even close allies of the president warn the Trump administration is only just now crystallizing its China policy, just over 100 days before the November election. And critics saying the velocity of action could have a destabilizing impact on U.S. relations with the world’s second largest economic power, with no apparent strategic gain.

“Whether you agree or disagree, you can glimpse more clearly now an approach from the Trump administration that’s going beyond ad-hoc roundhouses at China,” said Jude Blanchette, a China scholar at Center for Strategic and International Studies, a Washington-based think tank.