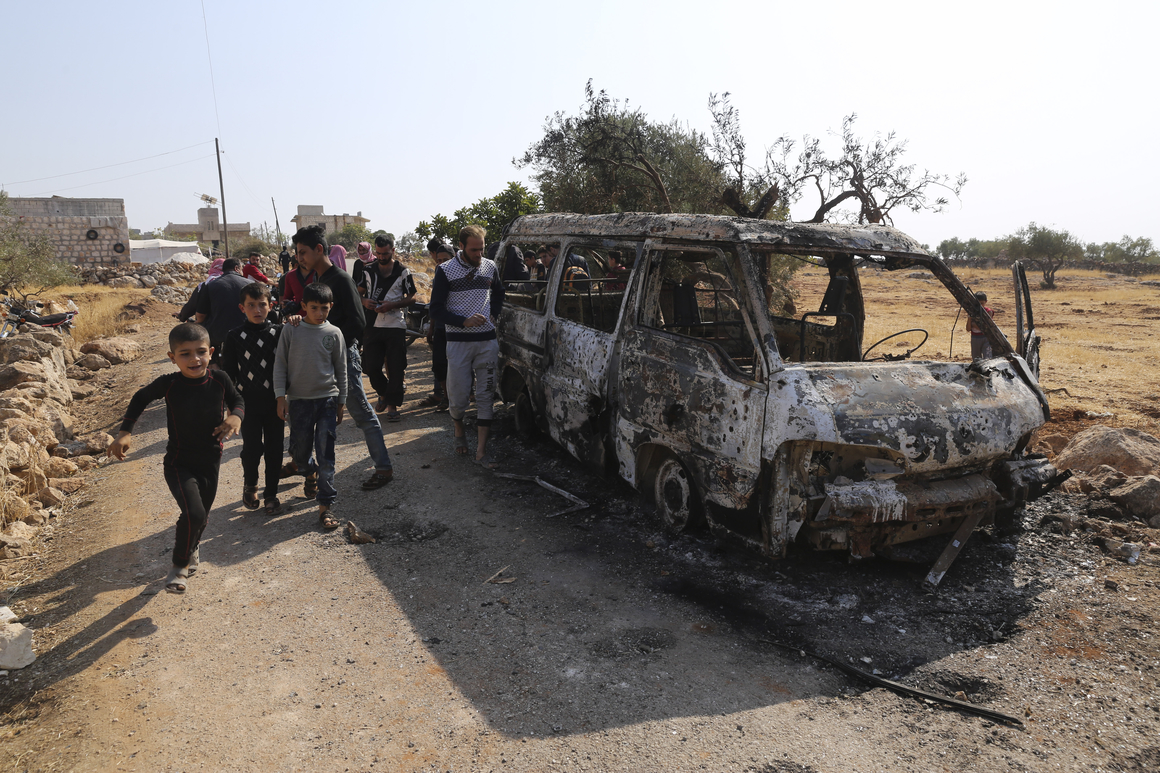 BEIRUT — The Islamic State group erupted from the chaos of Syria and Iraq’s conflicts and swiftly did what no Islamic militant group had done before, conquering a giant stretch of territory and declaring itself a “caliphate.”

Its territorial rule, which at its height in 2014 stretched across nearly a third of both Syria and Iraq, ended in March with a last stand by several hundred of its militants at a tiny Syrian village on the banks of the Euphrates near the border with Iraq.

But the militants have maintained a presence in both countries, and their shadowy leader Abu Bakr al-Baghdadi had continued releasing messages urging them to keep up the fight. U.S. officials said late Saturday that he was the target of an American raid in Syria and may have died in an explosion.

Here are the key moments in the rise and fall of the Islamic State group:

April — Abu Bakr al-Baghdadi, the leader of al-Qaida’s branch in Iraq, announces the merger of his group with al-Qaida’s franchise in Syria, forming the Islamic State in Iraq and the Levant.

January — Baghdadi’s forces overrun the city of Fallujah in Iraq’s western Anbar province and parts of the nearby provincial capital of Ramadi. In Syria, they seize sole control of the city of Raqqa after driving out rival Syrian rebel factions, and it becomes their de facto capital.

June 29 — The group renames itself the Islamic State and declares the establishment of a self-styled “caliphate,” a traditional model of Islamic rule, in its territories in Iraq and Syria. Baghdadi is declared the caliph.

July 4 — Baghdadi makes his first public appearance, delivering a Friday sermon in Mosul’s historic al-Nuri Mosque. He urges Muslims around the world to swear allegiance to the caliphate and obey him as its leader.

August — IS captures the town of Sinjar west of Mosul and begins a systematic slaughter of the tiny Yazidi religious community. Women and girls are kidnapped as sex slaves; hundreds remain missing to this day.

Aug. 8 — The U.S. launches its campaign of airstrikes against IS in Iraq.

Sept. 22 — The U.S.-led coalition begins an aerial campaign against IS in Syria.

May 20 — IS captures the ancient Syrian town of Palmyra, where the extremists later destroy archaeological treasures.

Feb. 9 — Iraqi forces recapture Ramadi after months of fighting and at enormous cost, with thousands of buildings destroyed. Almost the entire population fled the city.

June 26 — Fallujah is declared liberated by Iraqi forces after a five-week battle.

July 3 — IS sets off a gigantic suicide truck bomb outside a Baghdad shopping mall, killing almost 300 people, the deadliest attack in Iraq since the 2003 U.S.-led invasion.

May 10 — SDF captures the strategic Tabqa dam after weeks of battles and a major airlift operation that brought SDF fighters and their U.S. advisers to the area. The fall of the dam facilitated the push on Raqqa, about 25 miles away.

June 21 — IS destroys Mosul’s iconic al-Nuri Mosque and its 12th century leaning minaret as Iraqi forces close in, according to Iraqi and coalition officials.

July 10 — Iraqi prime minister declares victory over IS in Mosul and end of the extremists’ caliphate in Iraq.

Oct. 17 — SDF takes full control of Raqqa after months of heavy bombardment that devastates the city.

September-December —Syrian government forces, backed by Russian air power and Iranian forces, recapture IS territory on the western bank of the Euphrates River, seizing the cities of Deir el-Zour, Mayadin and Boukamal on the border with Iraq.

Aug. 23 — IS leader Baghdadi resurfaces in his first purported audio recording in almost a year; he urges followers to “persevere” and continue fighting.

Sept. 10 — SDF launches a ground offensive, backed by U.S.-led coalition airstrikes, to take the last territory held by IS in Syria’s eastern province of Deir el-Zour.

March 23 — SDF declares the complete capture of Baghouz and the end of the Islamic State group’s territorial “caliphate.”

Oct. 27 — The White House says President Donald Trump plans to make a “major announcement” after U.S. officials say Baghdadi was the target of an American raid in Syria’s northwestern Idlib province. The officials say confirmation of his death in an explosion is pending.