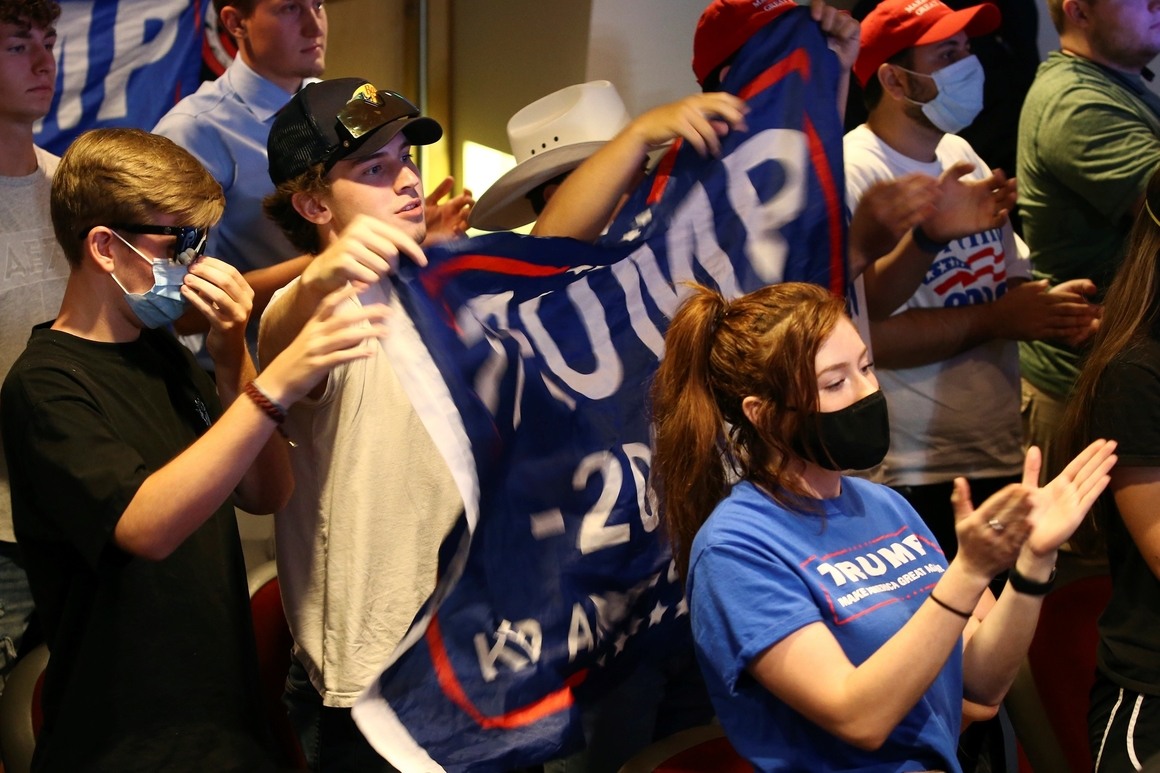 College conservatives are still waging the campus culture wars — even if they don’t have a campus.

With President Donald Trump facing a tough reelection fight, throngs of conservative college groups around the country are getting creative as they try to maintain the energy Trump tapped in 2016 on his way to a surprise victory.

Activist training sessions have moved online. Speaker series that bring controversial right-wing figures to campus are pivoting away from nationally recognized pundits to local ones instead. Pro-Trump student groups are organizing off-campus events to get around universities’ restrictions on hosting large gatherings. The Leadership Institute, perhaps the oldest college conservative group in the country, has even held online seminars for students on how to safely host events on campus.

Trump himself is similarly trying to keep the momentum alive. One of the two Covid-era rallies he held was a packed event in Arizona with Turning Point USA, a pro-Trump campus organizing group, that featured a parade of college students lamenting the encroachment of PC culture to 2,000-plus mostly maskless attendees. Charlie Kirk, the organization’s 26-year-old founder, will also have a speaking slot at the upcoming Republican National Convention.

“Honestly, what we do won’t change that much,” said Emma Meshell, the spokesperson for the libertarian organization Young Americans for Liberty. “The message is the same: we’re promoting liberty to young people. But the medium that we use may have to be adjusted a little bit depending on the rules that are in place.”

Yet the slate of work-arounds can’t fully replicate the on-campus activism that helped Trump capture a higher-than-expected percentage of young voters in 2016. Numerous right-leaning student groups admitted it has been hard to establish any national action plan for 2020, given the wildly different reopening plans each college has adopted. That reality has left some college conservatives conceding that their basic activism is up in the air just as the president tries to rally support to win another term.

“Are you allowed to have a literature table as long as you don’t come within six feet of people?” said Spencer Brown, the spokesperson for Young America’s Foundation. “Are they allowed to walk past your table and pick up a book and a pamphlet and then keep going?”

The solution, so far, seems to be an ad hoc one, based on the most conservative of principles: let the local students on the ground figure it out.

For the groups on campuses that will physically open this fall, life will go on as normal, albeit in manners that fit social-distancing guidelines.

“I mean, there’s hundreds of clubs on some of these campuses,” said Tyler Bowyer, the chief operations officer of Turning Point USA who also oversees Students For Trump, a special project of a sister organization, Turning Point Action, which is focused on Trump’s reelection. “So I think everyone’s going to kind of figure it out, whether that means being off campus or in a more outdoor, safer place to do so, where people don’t feel like they’re being forced into a small room with a big group of people.”

Students for Trump has been weighing the option of holding off-campus events to get around local university regulations on in-person gatherings. Over the next few weeks, the nationwide organization has planned a 12-stop tour across the country to hold events for youth activists in public parks, with speakers like Kirk and founder Ryan Fournier included, that adhere to social-distancing guidelines. In their first stop this weekend in Michigan, Bowyer said, the group would attempt to pull off the least socially-distanced electioneering activity imaginable: sending activists to knock on over 10,000 doors to canvas potential voters.

“Now obviously, a lot of people aren’t opening their doors, which, if they’re in a situation where they’re not [comfortable with] face-to-face contact, we totally respect that,” said Bowyer.

Others are seeing this as an opportunity to build out their digital operations, encouraging Gen-Z students stuck at home to put videos on social media or phone bank from home. 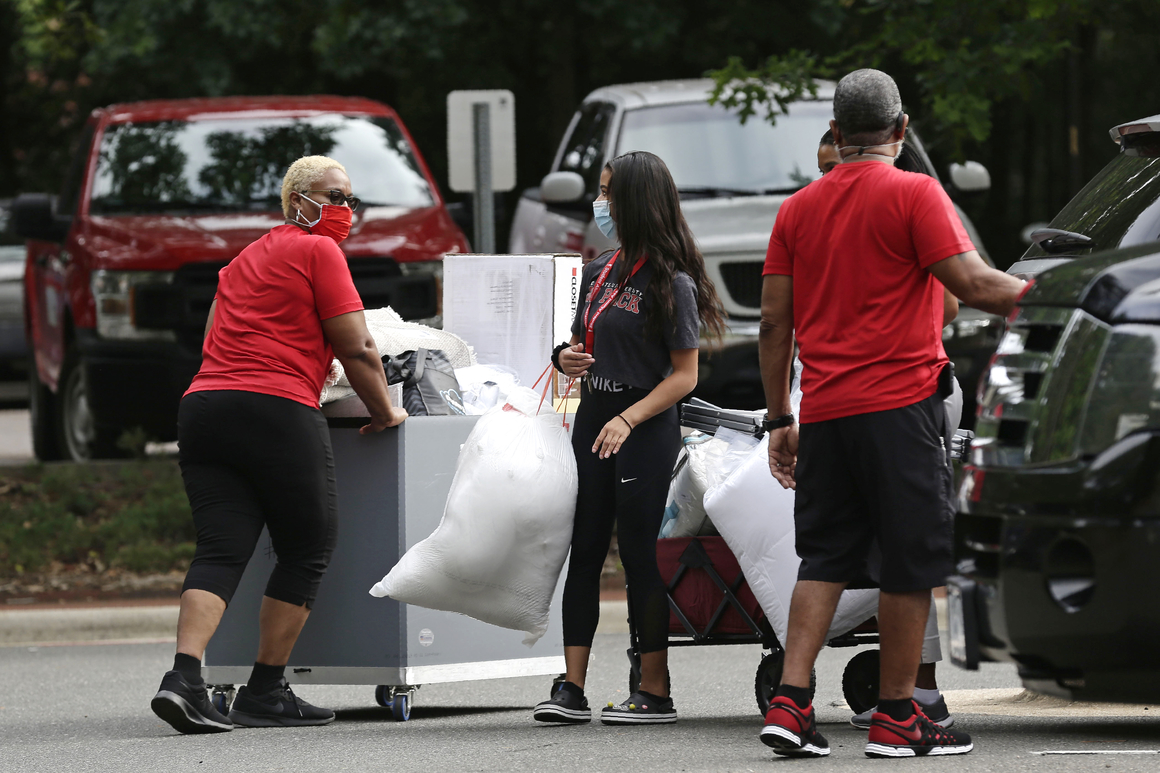 Meshell, of Young Americans for Liberty, claimed her organization has actually seen a greater interest in the group’s mission since the early days of the pandemic.

“A lot of our students immediately started reaching out to us and saying, ‘Hey, my school is shutting down, I have this time on my hands, how can I get involved?’” Meshell said. “And I do think that that comes from the political conversation that we’re having right now about civil liberties and about things like mask mandates and like quarantine, where students feel strongly about these issues one way or the other.”

Since declaring his run for president five years ago, Trump has developed an unexpected and fervent fan base on college campuses.

Though young voters are overwhelmingly Democrat — back in April, the Harvard Institute of Politics found that Joe Biden had a 23-point lead on Trump among voters between the age of 18 and 29 — Trump has a millennial following that’s more loyal than those of past Republican presidential candidates. In 2016, a Tufts University survey found that although Trump won just 37 percent of the millennial vote, 32 percent of those voters said that they were enthusiastic about his candidacy, far exceeding the 18 percent of the Hillary Clinton voters who registered excitement about their candidate.

Since then, conservative activist groups have proliferated on college campuses across the country, diminishing the standing of traditional groups like the College Republicans. Turning Point USA has become the most notable of those groups, bringing high-profile MAGA speakers such as Donald Trump Jr. to college campuses, and its affiliated group, Students for Trump, was tapped to hold Trump’s second mega-rally after the pandemic lockdowns started in March.

But those MAGA speaker series, which have been drawing sizable crowds throughout Trump’s presidency, are not an option during a pandemic-altered election year. The Young America’s Foundation, for instance, can’t fly in conservative pundit Ben Shapiro, one of the foundation’s most popular speakers, to speak to a packed college auditorium. Instead, local chapters are searching for people within driving distance.

“Speaker safety is something that we’ve had to worry about for a lot, a lot longer than just Covid times where people have, you know, tried to assault our speakers and throw things at them and everything else,” said YAF’s Brown. “So thankfully, we have a pretty good plan for that.”

Groups are also considering gathering an audience to a speaker beamed in over Zoom, the default pandemic conferencing app.

“The students on that campus can still experience [an] in-person event, but the guests might be remote just via Zoom and take questions that way,” Bryan Bernys, the Leadership Institute’s vice president of campus programs.

The Leadership Institute has similarly transitioned its activist lecture events to Zoom conferencing. In addition to the normal slate of seminars, the group has also integrated programs and events teaching how to hold socially-distanced events during the pandemic.

The biggest obstacle, however, might not have anything to do with social distancing — but how to keep students engaged in activism, or even in the local chapters, when they’re studying from home. Across the country, many students are opting to take time off school to wait out the pandemic, and conservative students aren’t immune.

“That does have an impact on your activist base and cultivating relationships,” said Bowyer, of Students for Trump. “If the bodies that were there one semester aren’t the same ones that come back the next semester, it’s like kind of retraining and reorganizing.”

The situation for every conservative activist group, from local chapter to nationwide organization based out of Northern Virginia, remains fluid. But Brown argued that such a situation appeals to conservative ideology.

“I think it’s one of those things that actually kind of fits into what we would be [doing when] advancing ideas on campus, which is this idea that a universal plan is not going to work well for everybody,” said Brown. “We obviously as conservatives prefer smaller units of decision making and more localized control.”