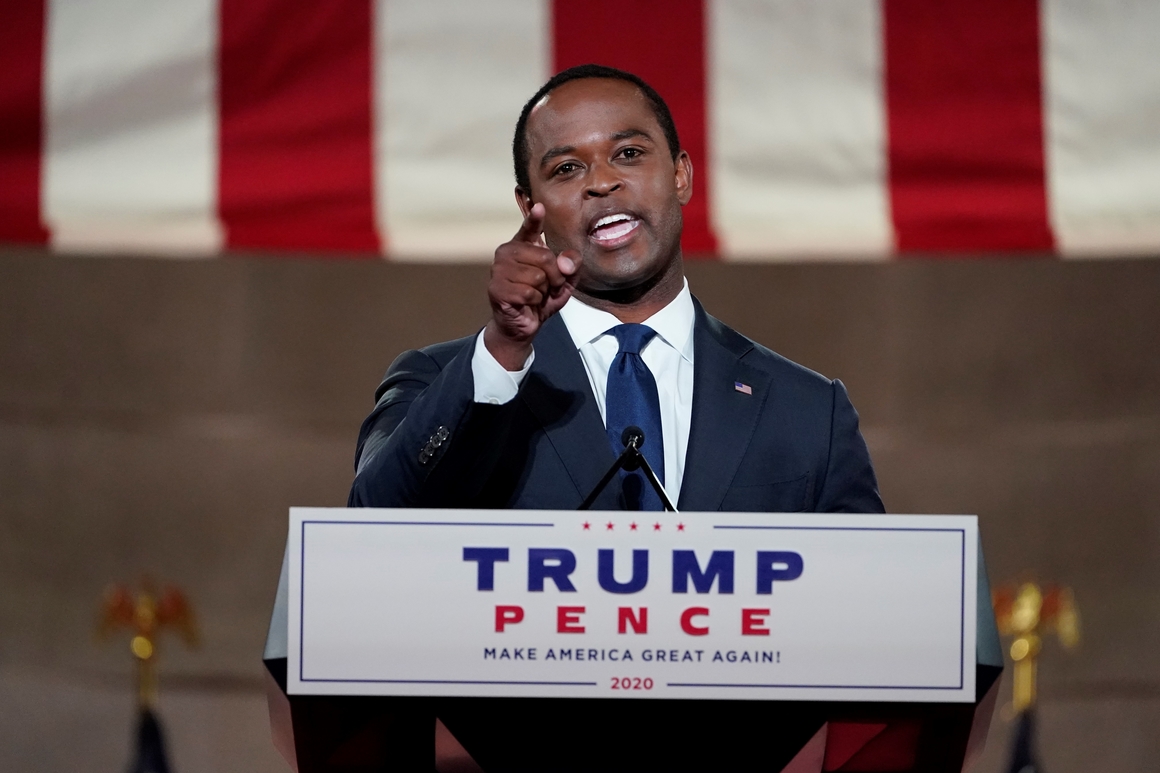 Donald Trump has thrived on traveling the country and speaking to large crowds in arenas from coast to coast, but he’s suddenly campaigning on a Rose Garden strategy, without concern for regulations against the mixing of government business and politicking.

During Tuesday’s GOP convention programming, Trump issued a presidential pardon for Jon Ponder, who was convicted of felony bank robbery, and he MC’ed a naturalization ceremony led by Department of Homeland Security Acting Secretary Chad Wolf. Later, he watched his wife Melania give her convention speech in the actual Rose Garden.

The first two moments allowed Trump and the Republican Party to pitch themselves to racial minorities, a consistent theme so far: Ponder is Black, and each new citizen was an immigrant of color.

All presidents seek to leverage their incumbency to win reelection. But Trump is jumping over every guardrail that prevent presidents from explicitly campaigning from the seat of the executive branch.

Here are the highs, lows and in-betweens of the second night of Republicans’ convention:

Aside from Trump’s White House events, it was notable that politics didn’t stop at the water’s edge on Tuesday, when Secretary of State Mike Pompeo made an unprecedented foray into the presidential campaign and addressed Republicans’ convention from Jerusalem.

For Pompeo, the speech not only broke with protocol for the nation’s chief diplomat — it also served as the unofficial launch of his own national political career. Just four years ago, he was a congressman from Wichita, Kan., with a conservative (but not particularly notable) voting record. Now, Pompeo is on a short list of Republicans speaking over these four nights who are jockeying to replace President Donald Trump atop the GOP ticket in 2024.

But first: Pompeo was in Jerusalem, looking out over the Old City, to tout his boss’ foreign-policy record. Trump, Pompeo said in his speech, “has put his America-first vision into action.”

“It may not have made him popular in every foreign capital, but it’s worked,” said Pompeo. “President Trump understands what my great fellow Kansan, President Eisenhower said, ‘For all that we cherish and justly desire — for ourselves or for our children — the securing of peace is the first requisite.’”

A lobsterman from Maine. A dairy farmer from Wisconsin. The governor of Iowa and the lieutenant governor of Florida.

Republican appeals to the battleground states were obvious on Tuesday. Most are states Trump carried in 2016 and must hold this year to win reelection. But there was also an appearance by a mayor of an Iron Range town in Minnesota, probably the most promising Clinton-won state for the president’s campaign to try to pick up this year.

Similarly, Democrats’ campaign was chock full of swing-state figures last week, with a particular focus on the three northern states that made up Trump’s winning margin: Michigan, Pennsylvania and Wisconsin.

The label above would’ve been considered unlikely given Vice President Mike Pence’s right-wing record on gay rights and other social issues.

No, Pence isn’t closing ranks with the group of gay Republicans trying to nudge the party toward the center on social issues. But he cut a pre-recorded video at the Lincoln Boyhood National Memorial in Southern Indiana — a notice on the website of the park, which includes a replica log cabin, says it was closed for a “filming event” last Monday — with Americans who say they have benefited from Trump’s policies.

“Every day, President Donald Trump is fighting to protect the promise of American liberty,” Pence said in effusive praise of the man who put him on the ticket, triumphant music playing underneath his narration. “Every day, our president’s been fighting to expand the reach of the American dream. And on every single day — without fail — President Donald Trump’s been fighting for you.”

Pence, standing outside Abraham Lincoln’s boyhood home, then introduced viewers “to a few remarkable Americans … who embody our president’s unbreakable devotion to ensuring that America is the land of unlimited opportunity for all.” They included a child who used a government voucher to attend a private school, another who benefitted from “right-to-try” legislation Trump signed, a former Pennsylvania judge, a truck driver from Ohio and a pastor from Oklahoma.

But Trump said it first. At a pre-election rally in Lexington, Ky., last year — this reporter was in attendance — Trump gushed over then-candidate Cameron, a Black former staffer for Senate Majority Leader Mitch McConnell.

As for Cameron’s speech on Tuesday, he nodded to the recent allegations of police misconduct against African Americans, including mentioning Breonna Taylor (whose name wasn’t in the remarks shared by the Trump campaign before Cameron’s speech), the woman killed by police in Louisville, Ky. Cameron’s office is investigating the shooting, but Democrats and activists have accused him of dragging his feet.

“Republicans will never turn a blind eye to unjust acts,” Cameron said, before turning to some of the more violent and destructive protests: “But neither will we accept this all-out assault on western civilization.”

Former Florida state Attorney General Pam Bondi spent a short stint on the White House payroll until early this year. She helped argue the president’s case against his impeachment and removal from office over charges of leveraging U.S. relations with a foreign country for dirt on Biden, his political opponent.

After the impeachment trial ended in Trump’s acquittal in the Senate, Bondi went back to work — as a lobbyist and registered foreign agent, as the Daily Beast’s Lachlan Markay reported Tuesday night.

All of that made her line of attack — hitting Biden for his son Hunter’s ties to Ukraine — all the more curious. While that seemed like an argument Trump’s campaign was poised to make against the former vice president before the impeachment fight, it has faded from the issue set.

Instead, the Trump campaign has attempted to paint Biden, who won the Democratic nomination by taking on liberals like Bernie Sanders, as beholden to left-wing elements in his party and as mentally depleted at the age of 77.

Bondi’s speech was the first sustained Hunter-related attack of the GOP convention. But it also raised the ghosts of the alleged wrongdoing that led to Trump’s impeachment in the first place: trying to get dirt on Biden at the expense of U.S. foreign policy interests.

Bondi, meanwhile, has her own ties to Trump that have been lucrative at times. She’s a member of Trump’s commission on opioids, and in Tallahassee she came under fire for declining to target the now-defunct, for-profit Trump University after receiving a donation from Trump’s foundation.

One night after the president’s eldest son and his girlfriend delivered exuberant speeches, it was time for two more of Trump’s adult children to tout their father’s leadership. Both stood by his record and ideology and ardently defended Trump’s character.

“I encourage you to see beyond the façade that so many other politicians employ. They mask themselves in disguises of decency as they try to pressure us to mask our own identities and beliefs,” said Tiffany Trump, the president’s only child with former model and actress Marla Maples, in an attempt to equate the image of Joe Biden promoted by Democrats with an effort to suppress the political right.

Not to be outdone, Eric Trump appealed directly to his father in his prime-time address.

“I miss working alongside you every single day, but I’m damn proud to be on the front lines of this fight,” Eric Trump said. “I am proud of what you are doing for this country. I am proud to show my children what their grandfather is fighting for. I am proud to watch you give them hell.”