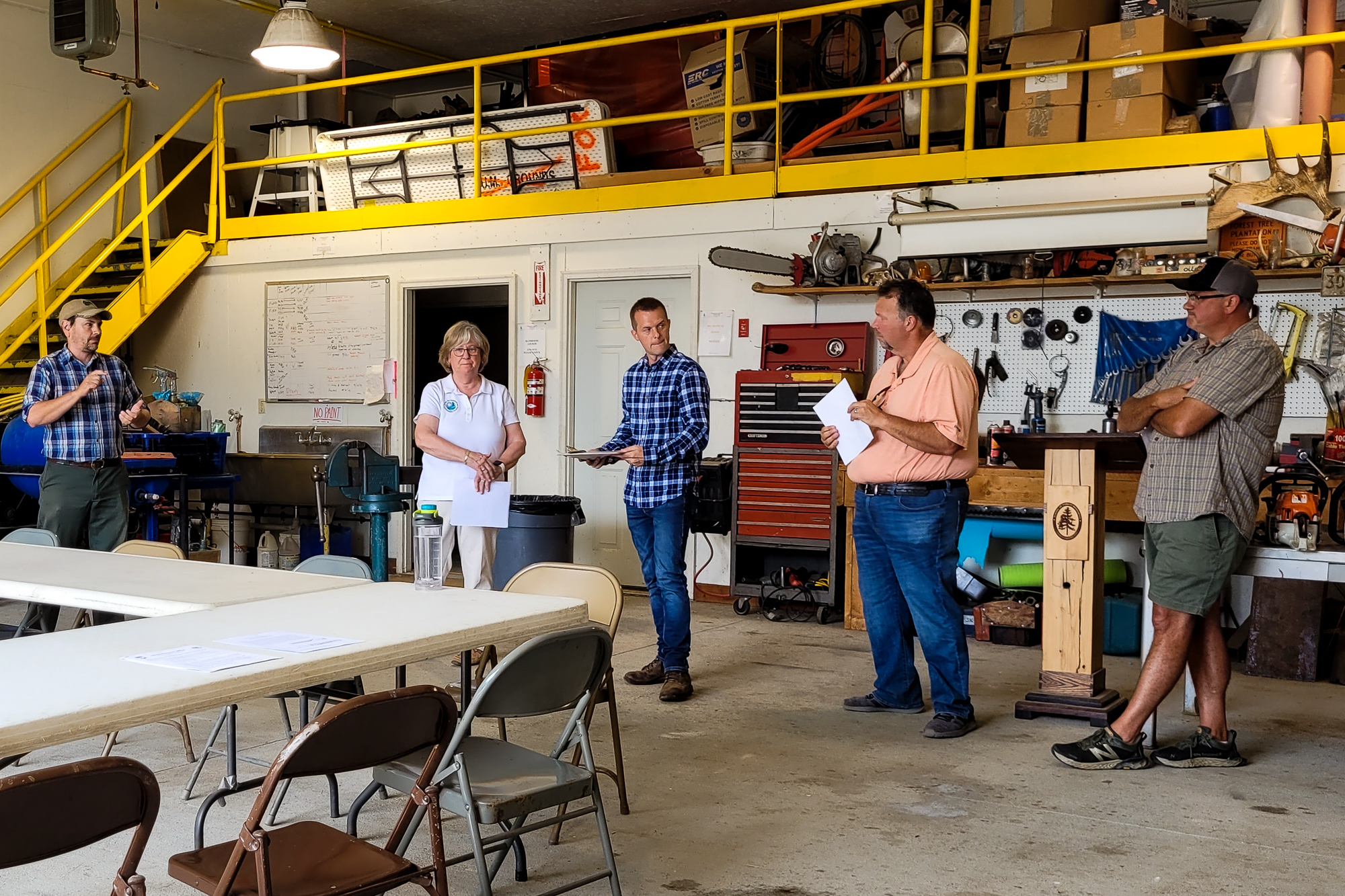 OLD TOWN, Maine — Jared Golden represents a tough district in a tough year for House Democrats, but his blueprint for getting reelected is simple: Make sure everyone knows that, sometimes, he can’t stand his party either.

There are signs that it’s working. As Golden toured the University of Maine recently, 23-year-old Kevin Norris stopped to thank the congressman for voting against his fellow Democrats’ ban on so-called assault weapons. Norris, an independent voter recently back from an overseas Army deployment, later praised Golden as one of the few Democrats who “gets it.”

Golden, a 40-year-old former Marine, has plenty more to say about his party’s handling of that gun vote. It starts with the technically inaccurate label of “assault weapons,” which he warned prompts many gun-owning constituents to accuse Democrats of “not really knowing what they’re talking about.”

That’s only one of many disconnects Golden identifies between national Democrats and the mostly blue-collar voters he appeals directly to. If his party wants a solution to that slow-motion fracturing, they might look no further than Golden himself — a notable exception to the rightward drift, accelerated by Donald Trump’s rise, in this remote northern Maine district.

“We have to ask ourselves about some of the policies that the national party is pursuing,” Golden said, granting a rare interview to a national outlet as he traversed the University of Maine campus in a dusty Chevy pickup. “I think, sometimes, I don’t agree with my party’s characterization of what are the most pressing needs at the moment.” 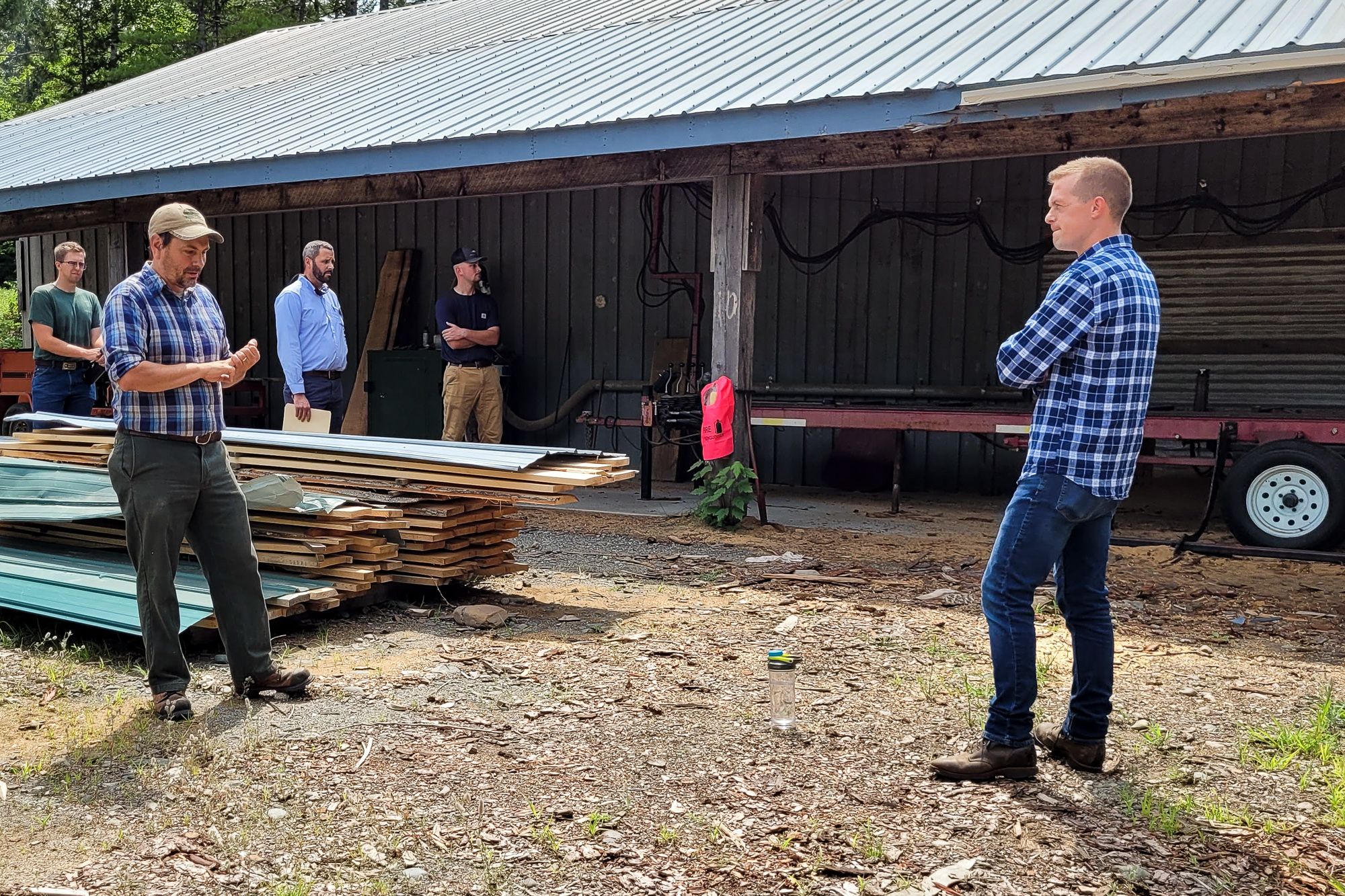 That approach has helped him twice defy the GOP’s growing strength here, outperforming President Joe Biden by almost 14 points in 2020, even as the same election decimated Democrats’ ranks in rural America. But Republicans insist his streak is about to run out.

Unlike in his last election, Golden now faces a well-known and well-funded challenger in former GOP Rep. Bruce Poliquin, who lost by a single percentage point in 2018 and opted out of running in 2020 for family reasons. The national GOP is prepared to aggressively target the seat, linking the two-term Democrat to his unpopular party leaders and still-rampant inflation.

“He is trying to do what Joe Biden did successfully — which is fool enough Americans into Biden being a moderate to win the race. Biden’s not a moderate,” Poliquin said in a recent interview outside a campaign stop, just before unloading a box of doughnuts he’d brought for a ridealong with the Lewiston Police Department.

Poliquin, whom Golden toppled four years ago in the first-ever ranked choice election for a member of Congress, pointed out that his foe votes “more than 80 percent” of the time with Biden and Speaker Nancy Pelosi.

But Golden, who detests labels as much as he detests D.C. politics, isn’t so easy to yoke to the rest of his party. While other Democrats fret over talking points, Golden typically skips weekly caucus meetings. He said dryly that he tosses memos from the party’s campaign arm “in the dumpster.”

And he told his party last year that Biden’s $1.9 trillion pandemic relief bill was a bad idea.

“I said, ‘I think this is more money than the economy needs’ … At the time, people said, ‘you’re wrong,” Golden recalled of his conversations with party leaders, long before inflation became Democrats’ biggest problem.

Golden, the only Democrat in Congress to oppose that bill, criticized it at the time as a “mountain of unnecessary or untimely spending” — words that he said left other Democrats “kinda pissed.” (“I thought it was true,” he added. “So I said it.”)

All of which means he might not be so easy to take down in November, despite Poliquin’s strong economics-focused pitch to voters here.

Golden did, however, vote for Biden’s latest big agenda item, a sweeping climate, health and tax bill that is — despite its new spending — projected to slash the deficit by $700 billion over a decade. Golden sees central elements of that measure, like the ability for the government to negotiate drug prices for Medicare, as hugely consequential to his district’s voters, who on average skew older and lower-income. 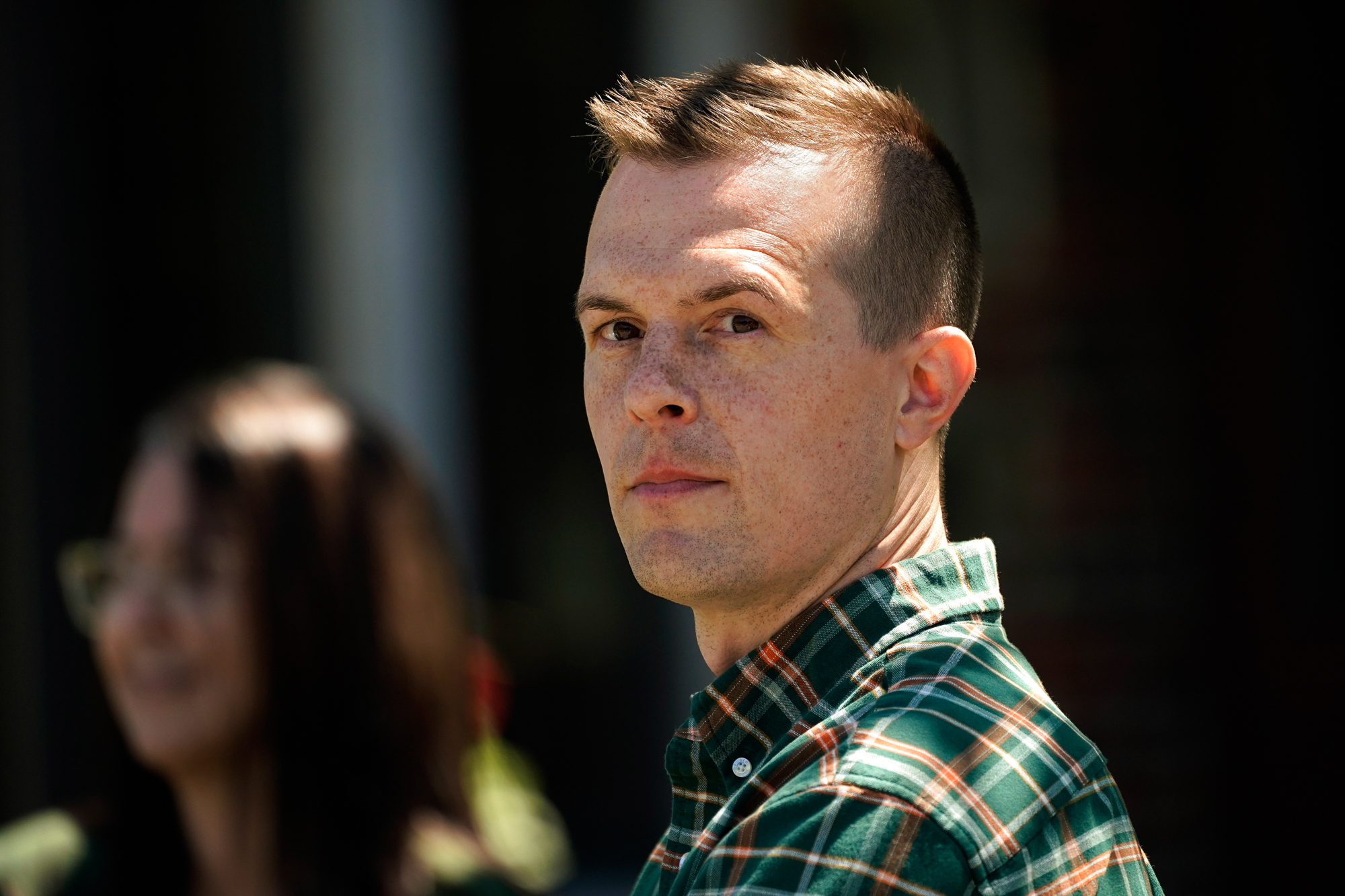 Those benefits are a long way off, though. And Republicans point out that billions more dollars, even if it is fully paid for, will do little to fight inflation in the short term.

Poliquin, a former Maine state treasurer, said it’s those price hikes that he hears most about during his time crisscrossing Congress’ largest district east of the Mississippi. And he believes voters are ready to rebuke Democrats for their spending spree, Golden included, despite the congressman’s own vote against much of it.

“The people I talk to are scared to death about the future of this country, for their future and their kids,” Poliquin said, recounting an elderly woman who told him she was afraid of losing her home in the face of Maine’s highest-ever prices for essential household goods. Heating oil prices have more than doubled since last winter, spooking Mainers, and hikes this year are expected to be worse.

Yet even as those economic headwinds drag down Biden, who is underwater in the state, Golden seems to keep his head above it. As Biden’s approval rating was barely crossing 40 percent around Memorial Day of this year, one previously unreported poll here found that Golden’s own favorability was at 60 percent.

That same poll, conducted by a Democratic-affiliated group but not distributed as the party declines to show its hand in competitive races, found Golden outperforming Poliquin by 9 points in a head-to-head matchup.

It’s not the only anomaly in this strange district. Golden also turned heads last month when he beat out Poliquin for the endorsement of the Maine Fraternal Order of Police — a rarity for any national Democrat. On the same day, the organization endorsed far-right former Gov. Paul LePage in his own comeback bid.

“Jared is more of an old-time Democrat where yes, you belong to a party, but he’s more on the right in the Democrat Party,” said Edes. “I think he’s going to win.” 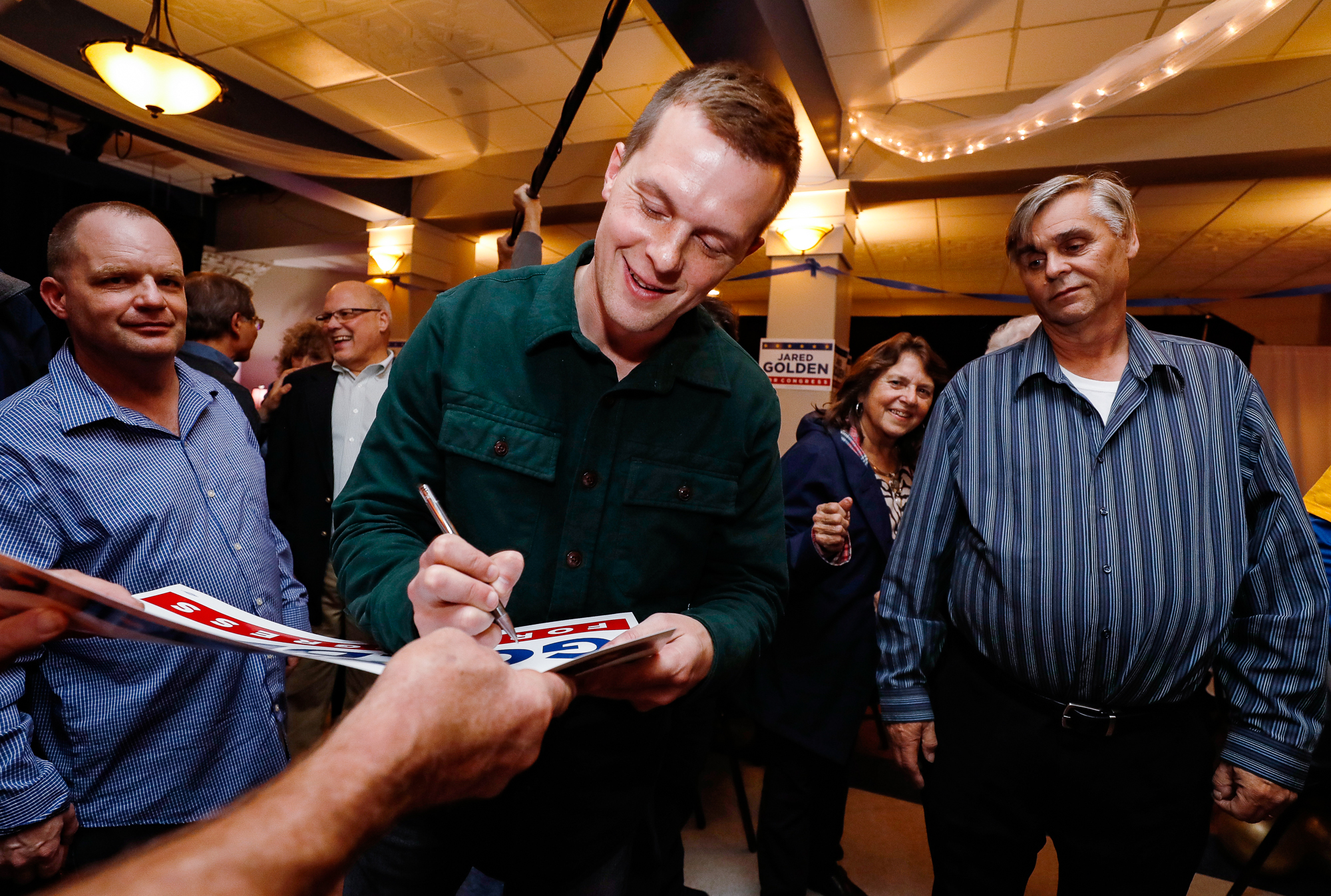 It’s that kind of outreach that’s sustained Golden’s supporter base despite his polarizing votes, from Democrats’ police reform debate (no) to Donald Trump’s impeachments (yes on two counts, no on the other) to Biden’s big dreams in “Build Back Better” (another no).

Another facet of Golden’s local allure: federal cash. As Democrats moved to reestablish earmarks for the first time in a decade, some battleground lawmakers were wary of potential GOP attacks. But Golden jumped at the chance, getting eight of 10 earmarks approved.

A big chunk of that money went to Golden’s home of Lewiston, where Mayor Carl Sheline worked with his office for a month on the application.

“Jared always does what he thinks is right and for that he has my deep respect and vote”, said the politically unaffiliated Sheline, adding that he is formally endorsing Golden for reelection.

During his recent visit to the University of Maine, Golden and his team toured the site of another potential earmark beneficiary. After leaving the campus, where the flannel-clad congressman fit in well among the plentiful Carhartt gear and steel-toed boots, Golden suggested that his party “just talk about what we’ve been successful doing, instead of constantly focusing on — griping about — what” can’t get done.

But he’s not going to waste too much time thinking about it, or obsessing about his political future. Quoting former Secretary of State Colin Powell, who warned not to tie your ego to your position in life, he observed that “this isn’t my identity.”

“I’m going to continue to do it for the time being if voters reelect me,” he said. “But I’m not, like, losing sleep at night, worrying, ‘Am I gonna lose?'”