Donald Trump lost the presidency, but his opponents so far have not achieved the victory they want most: A fatal puncturing of the Trump movement, a repudiation so complete that it severs his astonishing grip on supporters and leaves him with no choice but to slink offstage and into the blurry past.

For now, Trump dominates conversations about both present and future. His outlandish claims that he won the election except for comprehensive fraud have helped raise more than $200 million since Election Day. Many of his partisans share his dream of recapturing the presidency in 2024. For those who despise him, to paraphrase a famous Democratic speech, it seems clear the work goes on, the cause endures, the fear still lives, and the nightmare shall never die.

Except it will die — most likely with more speed and force than looks possible today.

There are three primary reasons to be deeply skeptical that Trump’s moment of dominating his party and public consciousness will continue long after Jan. 20.

Most important are the abundant precedents suggesting Trump does not have another important act in national politics. The perception that Trump will remain relevant hinges on the possibility that he is a unique historical figure. Trump, however, is singular in one sense only: No politician of his stripe has ever achieved the presidency. In multiple other ways, he is a familiar American type, anticipated by such diverse figures as Joseph McCarthy, George Wallace, and Ross Perot.

Like Trump, they all possessed flamboyant, self-dramatizing personas. They tapped into genuine popular grievance toward elites, and had ascendant moments in which they caused the system to quake and intimidated conventional politicians of both parties. In every case, their movements decayed rapidly. Cults of personality in American politics are quite common. But they never live long, and Trump has offered no reason to suppose he will be an exception.

That’s the second reason Trump is not well-positioned to retain his hold on public attention: He has largely abandoned any pretense that he thinks about anything other than his personal resentments, or that he is trying to harness his movement to big ideas that will improve the lives of citizens. When he vaulted into presidential politics five years ago, Trump’s still-potent gifts — for channeling anger, for mockery, for conspiracy theory — were once channeled to an agenda that fellow Republicans were largely neglecting, over trade, immigration, globalization, and perceptions of national decline. These days, no one can follow Trump’s Twitter feed and believe that he cares more about the public’s problems than his own, and that is not a recipe for sustaining political power.

Here is the third reason to be bearish on Trump’s future: Politics never stands still, but Trump largely does. As he leaves the White House, Trump should be haunted by a stark reality — if he had any capacity for self-calibration, he wouldn’t be leaving the White House at all. He’s got one set of political tools. When things are going well, his instinct is to double down on those. When things are going poorly, his instinct is to double down on those. In political terms, the pandemic demanded modulation of Trump’s blame-casting brand of politics — but also would have lavishly rewarded him if he had done so.

Trump didn’t change because he didn’t perceive the need and couldn’t conceive of how to do so. That’s a combination of flawed judgment and impoverished imagination that hardly supports optimism about his ability to retain power in the new circumstances that await him once gone from the White House.

Time moves on. Ambitious Republicans who wish to regain control of the party and become president themselves do not have to confront and defeat Trump, as his 2016 rivals tried and failed to do. They merely have to transcend him, using issues to create leadership personas that will soon enough make the 74-year-old Trump look irrelevant, an artifact of an era that has passed. What about his 88-million Twitter followers, and the possibility that in his ex-presidency he will start his own news network? It is true that Trump will not lack for avenues to get his message out. But what will that message be, beyond repeating claims of a stolen election that his own attorney general has said are not true. Conspiracy theories, of course, can have power, even when the evidence is nil — that’s just proof of how deep and wide the conspiracy must go. But this isn’t a promising basis to return Trump to the White House or make him kingmaker.

This brings the mind back to the figure who is the most vivid antecedent of Trump: Joe McCarthy.

A comparison to McCarthy is usually invoked as an insult. Certainly I do not intend it as a compliment. But in this case let’s keep the comparison entirely clinical. Like McCarthy, Trump used accusation and grave warnings of national betrayal and decline to tap into currents of nativism and suspicion of elites that stretched back to the country’s early days. Like McCarthy, Trump is regarded by people who know him well as vastly more interested in publicity for himself than he is about the issues on which he inveighs. And just like McCarthy, Trump seemed to become intoxicated by publicity and power, becoming louder and more unleashed from fact the more he was challenged and the more his moment seemed to be slipping away. 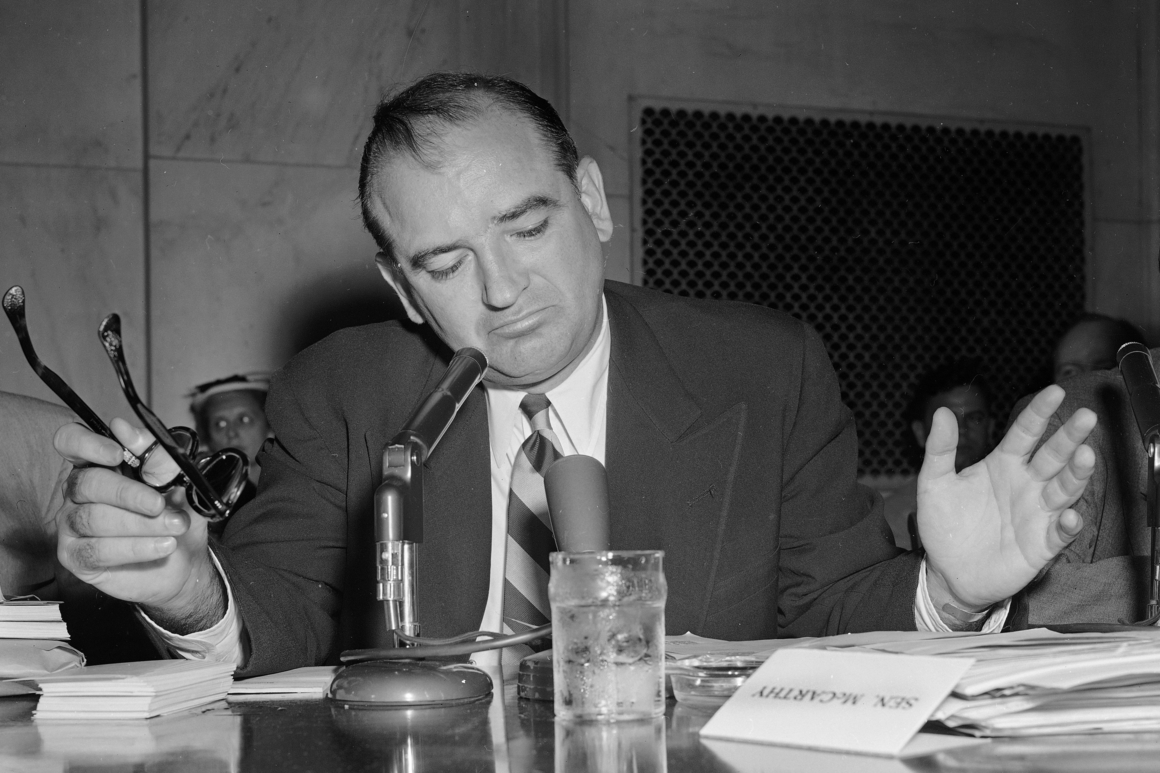 In the Washington Post the other day, Yale historian Beverly Gage noted that McCarthyism didn’t die after Joe McCarthy was censured by his fellow senators in 1954. That’s true. But McCarthy as a figure who could instill fear or command influence did recede rapidly.

In an engaging memoir, “Without Precedent,” one of the secondary participants of the McCarthy drama shared an arresting recollection. John G. Adams was a fellow attorney with Joseph Welch (famous for his challenge to McCarthy, “Have you no sense of decency, sir, at long last?”) in the Army-McCarthy hearings that were the Wisconsin senator’s undoing. After his censure, McCarthy on separate occasions kept calling Adams for the two to get together, to somehow demonstrate no hard feelings, in what McCarthy apparently believed would be part of his public rehabilitation. He proposed a dinner with spouses. “She despises you,” Adams replied. “She wouldn’t set foot in your door.” McCarthy giggled. “Heh, heh, you know the girls,” the disgraced senator said. “They take these things seriously.”

This reminded me of something a reporter who has covered Trump since his New York years once told me: “It’s not that his bark is worse than his bite. He doesn’t really want to bite at all. He wants to be petted.”

In the case of Adams and McCarthy, they did finally have their meeting, in which the senator spun fantasies of comeback. His adversary told him: “It’s no good, Joe. It’s over and finished; that’s all.”

That turned out to be true for McCarthy, who died as a pathetic alcoholic at age 48 in 1957. It was basically true for George Wallace, who won 13.5 percent of the vote as a third-party candidate of racial and class backlash in 1968. He was shot in an attempted assassination when he tried again in 1972, by which it was already pretty clear that his hour of consequence had past. Perot, a more benign representation of the American fascination with supposed strong men who burst on the scene in noisy opposition to conventional politics, won nearly 20 percent of the vote as a Reform Party candidate in 1992. That dwindled to 8 percent when he tried again in 1996, and Perot continued to slip from public view.

It is not just in American history but American imagination that self-invented, outsized outsiders don’t have staying power. Willie Stark, modeled after Huey Long, was shot at the end of “All the King’s Men.” F. Scott Fitzgerald delivered the same fate to Jay Gatsby. Not long after the Wizard of Oz is exposed as an amiable fraud (“Pay no attention to that man behind the curtain!”), Dorothy awakens to discover it was all just a dream.

The Trump years were not just a hallucination. But chances are they will soon enough come to feel like they were — which won’t leave much opportunity to return to real power.