Kevin McCarthy is trying to get back in Donald Trump’s good graces — but he could wind up making more people unhappy in the process.

In the aftermath of the deadly Capitol riots, McCarthy angered Trump by saying he bears some responsibility for the attack. The House GOP leader even floated censuring the former president. But then McCarthy struck a softer tone last week, saying that Trump didn’t “provoke” the violence and that “Trump continues to have that ability to lead this party and unite.”

McCarthy also said he wants Rep. Liz Cheney (R-Wyo.) to remain in leadership after she voted to impeach Trump. But he voiced “concerns” with her vote too and called out Cheney for not giving him a heads up about her position.

And McCarthy’s campaign appears to be working, at least to some degree. While Trump is still disappointed with the California Republican’s initial response and even reportedly called McCarthy a vulgarity, one Trump adviser said the pair remains on good terms despite their “fits and starts,” adding that Trump appreciated McCarthy’s comments chastising Cheney. Another source says Trump and McCarthy had a cordial conversation since their last, heated interactions about the riots.

McCarthy’s public and private efforts to smooth things over with Trump shows just how much he still needs the MAGA wing of the party on his side in order to cement his future leading the GOP.

Yet the next two years could prove tricky for McCarthy as he tries to win back the majority and prevent his bitterly divided party from erupting into an all-out civil war. And the crisis over the Capitol attack, along with a conservative-led push to oust Cheney from leadership that will likely come to a head next week, will serve as a major test of McCarthy’s leadership in the post-Trump GOP.

“I think that everyone in leadership is trying to put the party on the best foot that they can, given the challenges of the moment,” said freshman Rep. Peter Meijer (R-Mich.), who voted to impeach Trump.

At the same time, however, McCarthy knows he needs to create some distance between his moderates and Trump if he wants to reclaim the House and achieve his dream of securing the speaker’s gavel. And then there’s McCarthy’s other challenge of repairing the GOP’s image with political donors and the corporate world, which has frozen PAC dollars to Republicans, such as McCarthy, who challenged the election results.

That might explain why McCarthy’s response to the riots has been all over the map, at least in the eyes of some in the GOP. Several House Republicans say McCarthy — an affable people-pleaser who prides himself on his fundraising skills and relationships with members — is essentially trying to have it both ways.

“This is vintage Kevin McCarthy. He says yes to everybody, tries to make everybody happy,” said one GOP lawmaker, who was granted anonymity to speak more freely. “And it always comes back to bite you in the butt.”

“Will the real Kevin McCarthy please stand up?” the lawmaker added. 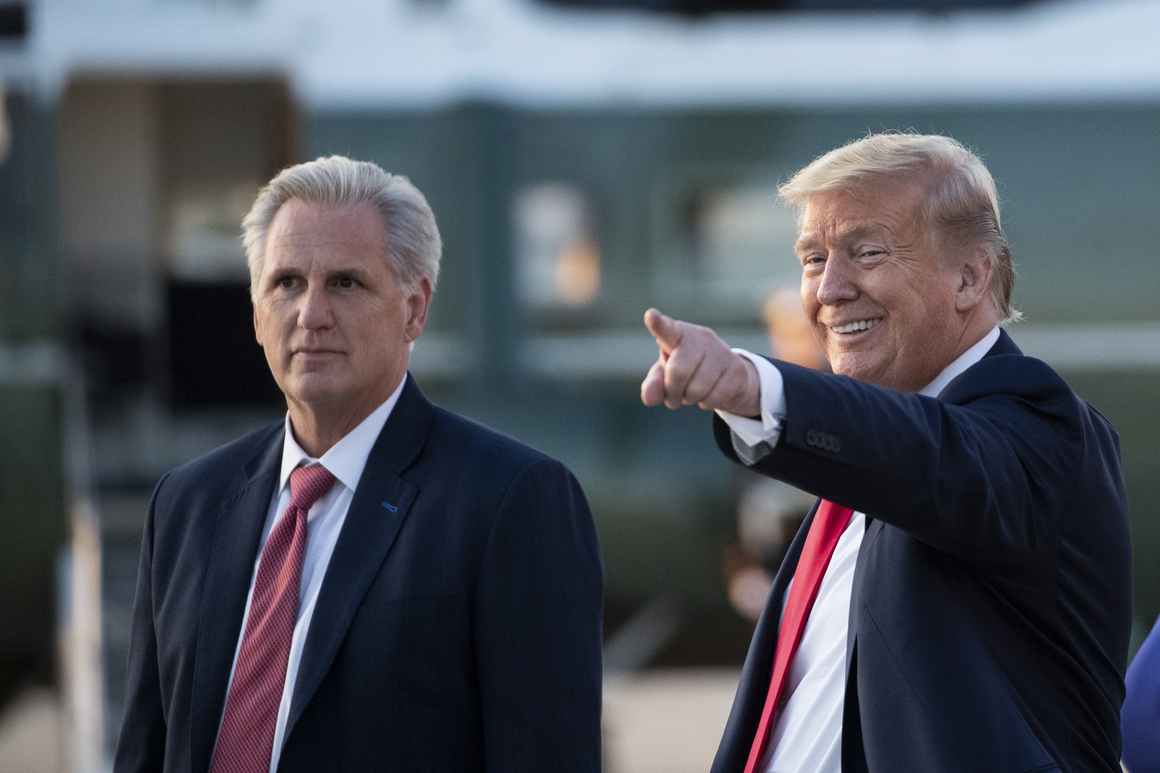 McCarthy’s allies and aides, however, say he has been consistent in his posture toward Trump. The minority leader still maintains that Trump is partly to blame for the riots — but because he didn’t do enough to quell the mob as they stormed the Capitol, not because Trump tried to incite the violence. McCarthy made a similar statement in his floor speech during Trump’s second impeachment.

And while McCarthy also came under fire this weekend for suggesting that “everybody across this country has some responsibility,” he was referring to the heated political discourse, which is a sentiment he has expressed repeatedly since Jan. 6.

“I have not changed in that [position],” McCarthy said on Gray Television’s “Full Court Press With Greta Van Susteren.” “I thought the president had some responsibility when it came to the response. If you listen to what the president said at the rally, he said, ‘demonstrate peacefully.’”

While McCarthy hasn’t received anywhere near the same level of GOP blowback as Cheney, he has faced his share of criticism in the conference for his response to the riots, at least behind closed doors. Some GOP lawmakers say McCarthy now appears to be watering down his criticism of Trump in order to avoid the wrath of hard-line conservatives, who once denied him the speakership in 2015.

“He always puts his political finger to the wind and tries to shift,” said one House Republican. “It seems to be based on his personal ambitions.”

Before he was “My Kevin” — a nickname that Trump fondly bestowed upon McCarthy — he branded himself as a “Young Gun” Republican with close ties to Silicon Valley.

But over the past four years, McCarthy has built his political identity around his close relationship with Trump, emerging as one of his closest and most reliable conservative allies on Capitol Hill. And it’s a reputation that McCarthy appears eager to maintain, even in the wake of the Jan. 6 attacks that left five dead.

The fight over Cheney — which has already become a proxy battle for the future of the GOP — could put McCarthy in a bind.

Allowing Cheney to be ousted from her job as GOP conference chair, the No. 3 leadership position, would likely be disastrous for a party that just elected a record-breaking number of women to Congress, including in swing-districts that will be crucial to protect in 2022. And all the GOP leaders would rather be rallying around their opposition to the Biden administration.

Yet there’s also little political upside right now for McCarthy to vigorously defend Cheney, who has become public enemy No 1. in Trumpworld.

“The odds are still in [Cheney’s] favor because members — mostly — don’t want leadership fights,” said another GOP lawmaker. “Watch McCarthy and [GOP Whip Steve Scalise] on this one — it’s on them to stop it, or they’re complicit in ousting her.”

McCarthy, however, has done little publicly or privately to quash the brewing rebellion over Cheney, according to multiple sources, despite saying he wants her to remain in her post. In fact, McCarthy publicly sided with Cheney’s critics, who are not only upset with her impeachment vote but also incensed that she announced it a day ahead of time, which gave Democrats ample time to incorporate her statement into talking points.

But in an attempt to maintain some unity in the GOP ranks, McCarthy will provide members a forum for their voices to be heard, saying they can vent their frustrations during their in-person conference meeting next week. McCarthy has also implored Republicans to avoid attacking each other in the press — advice which some GOP lawmakers ignored.

“My only conversation with Kevin McCarthy, was after a TV hit, he asked me not to name members by name because we’ve all seen a substantial increase of death threats,” said Rep. Matt Gaetz (R-Fla.), a Trump loyalist who will be campaigning against Cheney in Wyoming this week. “I’ve subsided referencing people by name for a day or two. As Liz became more problematic with her divergence with the conference, it became untenable not to identify her as against the America First Vision.”

Rachael Bade and Olivia Beavers contributed to this report.