Sen. Kelly Loeffler (R-Ga.) declined multiple times to answer whether President Donald Trump lost the November election while repeatedly attacking her opponent, Rev. Raphael Warnock, as a radical during the sole debate of their special election runoff next month.

Warnock, the pastor of the historic Ebenezer Baptist Church in Atlanta, countered Loeffler’s attacks by repeatedly criticizing her stock trades made in office and her handling of the coronavirus pandemic, saying she had no proactive case for her election to the seat to which she was appointed earlier this year.

The two candidates faced off for an hour in a debate Sunday evening that aired on PBS affiliates in Georgia. But in a sign of the national attention both Georgia Senate runoffs are receiving, the debate was simulcast nationally by CNN, Fox News Channel and C-SPAN.

Both races on Jan. 5 will decide which party controls the Senate after President-elect Joe Biden’s inauguration. Republicans have already won 50 Senate seats in the new Congress, but Democrats would have the majority if they win both Georgia races after Kamala Harris becomes vice president.

Warnock and Loeffler’s back and forth largely repeated the attacks the two have levied against each other for weeks on the campaign trail and in the bulk of their TV ads. Loeffler repeatedly referred to Warnock as a “radical liberal” and brought up previous comments he has made about police and the military during his sermons. Warnock responded by saying he does not support defunding police, and criticizing Loeffler’s negative campaign against him.

“It’s clear to me that my opponent is going to work really hard spending millions of dollars of her own money trying to push a narrative about me because she’s clearly decided that she does not have a case to be made for why she should stay in that seat,” he said.

In the first question of the debate, Loeffler refused to say whether Trump had lost the election despite Georgia’s certification of the results. Trump held a rally to boost her and fellow GOP Sen. David Perdue in the state Saturday, where he repeated his false claim that the election was rigged against him.

“The president has every right to every legal recourse, and that’s what’s taking place,” she said, in an answer she repeated several times when pressed on Trump’s remarks.

Loeffler appeared to acknowledge Trump’s defeat indirectly when pressed by the moderator about the fact that Republicans’ Senate majority would only be in jeopardy if Trump would not be in office next year. She said the Senate majority was at stake in the race.

“The Democrats want to fundamentally change America, and the agent of change is my opponent,” Loeffler said. 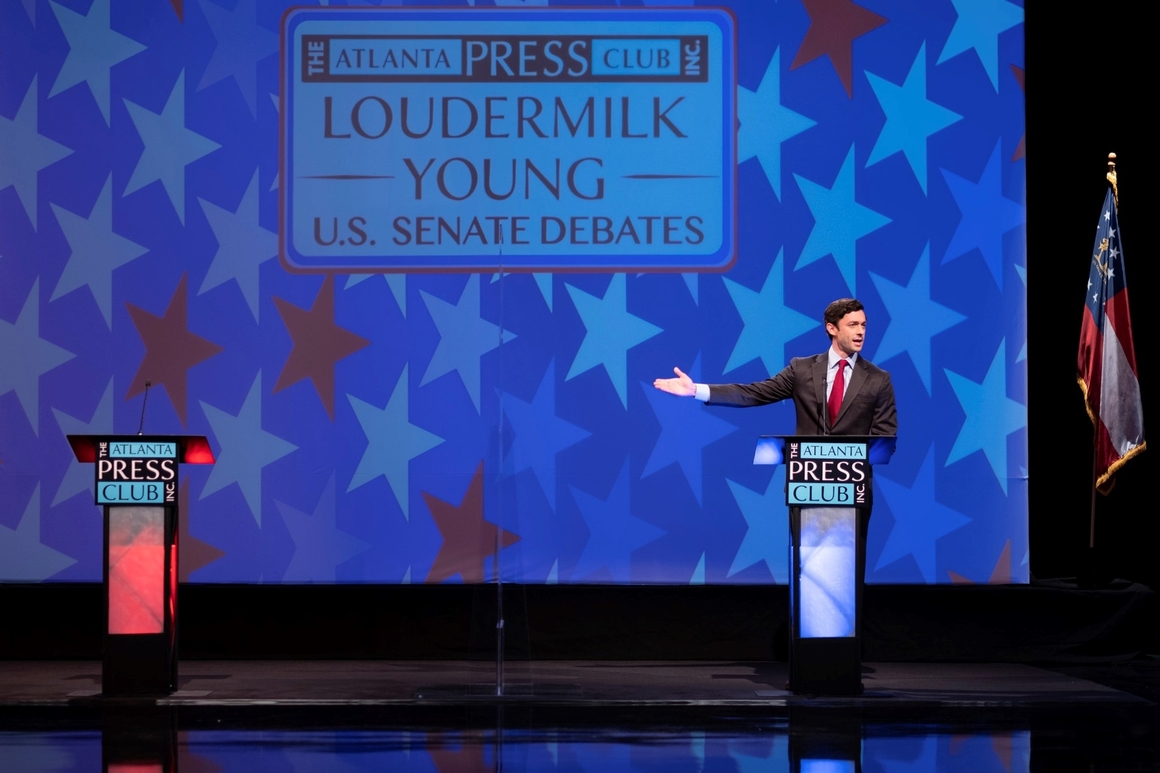 Both candidates dodged difficult questions at times. Loeffler did not answer directly when asked whether senators should be barred from trading stocks. She and Perdue have both come under fire from Democrats for trades made while in office.

Warnock did not answer twice when pressed on whether he would support expanding the size of the Supreme Court. He said it’s not an issue voters bring up to him in the state, though Republicans used the debate over “court packing” as a wedge against Democratic candidates across the country this year.

In contrast to the national audience for the special election debate, Perdue’s Democratic opponent, Jon Ossoff, appeared by himself on public TV in Georgia earlier Sunday. That’s because Perdue, who is seeking a second term in the Senate, declined to participate with Ossoff, whom he debated twice before the November election.

“Your senator feels entitled to your vote. You senator is refusing to answer questions and debate his opponent because he believes he shouldn’t have to. He believes this Senate seat belongs to him,” Ossoff said.

Perdue’s campaign manager Ben Fry released a statement following the debate calling Ossoff “unserious,” but not addressing the senator’s decision not to participate.

Perdue beat Ossoff by 2 percentage points in November but finished just shy of the majority of the vote required under Georgia law to win the election. In the special election, Warnock (33 percent) and Loeffler (26 percent) were the top two finishers in a 20-candidate field.