Republicans are about to learn if they have a serious problem in Kansas — and another major threat to their teetering Senate majority.

In Tuesday’s primary, GOP voters will decide between hard-line conservative Kris Kobach and Rep. Roger Marshall as their nominee for an open Senate seat. Democrats haven’t won a Senate race in Kansas in nearly a century. But both parties think Kobach as the nominee would put the race squarely on the map, stretching Republican resources thinner as they’re already spending to protect a half-dozen vulnerable incumbents.

Also on the ballot, House GOP operatives are paying close attention to embattled Rep. Steve Watkins (R-Kan.), who’s up against two primary challengers and a barrage of bad headlines over alleged ethical transgressions. If Watkins hangs on, Democrats are ready to pounce, despite the district’s pronounced pro-Trump tilt.

There are also elections in Arizona, Michigan, Missouri and Washington state. Here’s POLITICO’s guide to what to watch:

A bullet dodged, or a slow-motion disaster?

Nearly 13 months after Senate Republicans first blasted Kobach as an unacceptable nominee in Kansas, they might be stuck with him.

Most Republicans see the Kobach-Marshall race as a toss-up — a remarkable situation that the GOP establishment wanted to avoid. Informed by the 2018 governor’s race — Kobach won the primary narrowly, only to lose the general election — Republicans tried to stop him this time.

They repeatedly pressed Secretary of State Mike Pompeo to join the race, but he declined multiple times. They rallied behind Marshall as the more electable candidate, but only in the closing weeks after months of entertaining other options.

Marshall appeared to have a healthy lead last month and looked to be on a path to victory. But nearly $5 million in spending from a super PAC with ties to Democrats bashing Marshall and elevating Kobach threw the race into chaos.

Republicans now admit it’s a dead heat and are openly expressing concern that a Kobach victory could be a threat to the party’s Senate majority. 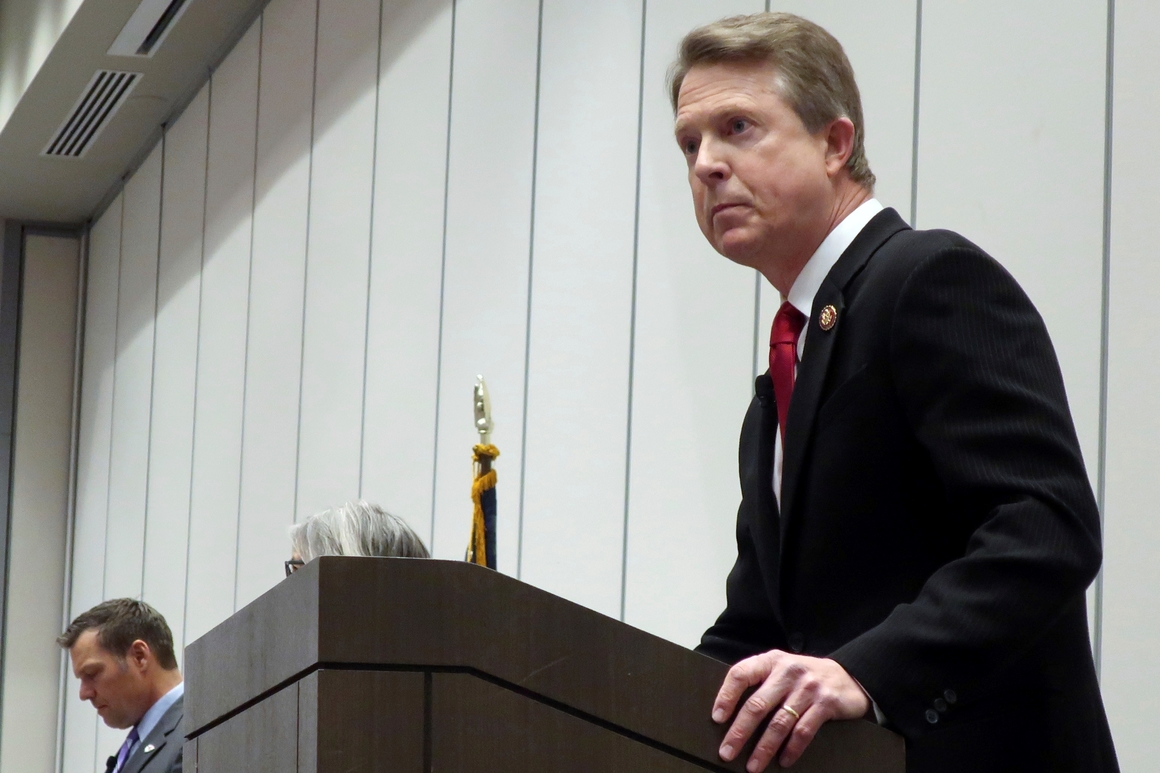 President Donald Trump, who endorsed Kobach in 2018, remains in touch with the conservative candidate, who shares his hard-line views on immigration and concern over voter fraud.

Kobach has repeatedly argued that the party shouldn’t fret about losing Kansas if he’s the nominee. He argues a Senate race would be fought on different grounds than his gubernatorial run, and Trump will be at the top of the ticket this time.

Will Watkins survive his primary after felony charges?

Watkins won this Republican-leaning seat in 2018 by less than 1 point, a victory due in part to hefty spending from a super PAC financed by his father, Topeka endocrinologist Steve Watkins Sr. His first campaign was rife with scandal, and his reelection bid has been just as dramatic.

Within nine months of Watkins’ congressional term, former Kansas Gov. Jeff Colyer openly lured state Treasurer Jake LaTurner out of the Senate race — where they feared he and Marshall would split the anti-Kobach vote — and into a 2nd District race against Watkins, whom Colyer said showed “poor fundraising and a lack of coalition building.”

POLITICO revealed in March that the Federal Election Commission had launched a probe into whether Watkins’ father made illegal contributions to his son’s bid. And just before the first and only televised debate of the primary, the Shawnee County district attorney charged Watkins with voter fraud, a move that forced him to step down from his House committee assignments.

Watkins has denied wrongdoing and slammed the charges as politically motivated because the DA shares a political consultant with LaTurner. Though Republicans in D.C. and Kansas agree he is seriously at risk of being ousted, he has a few reasons for optimism. Watkins had outraised LaTurner $1 million to $776,000 as of mid-July, and he has outside help from a mysterious super PAC that has yet to reveal the source of its funding. LaTurner is also splitting the anti-incumbent vote with a third candidate, Dennis Taylor.

House Democrats, meanwhile, expect to nominate Topeka Mayor Michelle De La Isla, who has only nominal primary competition and has already banked over $500,000. The Democratic Congressional Campaign Committee has placed De La Isla on its Red to Blue program for top House challengers and believes it can flip the seat no matter who emerges as the GOP nominee.

Will the Clay dynasty and a member of ‘The Squad’ go down?

In St. Louis, Democratic Rep. Lacy Clay is trying to hold off another primary challenge from Cori Bush, a nurse and Black Lives Matter activist. She lost by 20 points in 2018, but Bush’s operation is more organized and better funded this time around.

Bush has the full backing of Justice Democrats and Sen. Bernie Sanders (I-Vt.), and Bush and her allies are outspending Clay on the air by some $250,000, according to media buying data. But Clay is an institution in the St. Louis area, which he and his father have represented since the late 1960s. He has gone negative in the closing days, hitting Bush for paying herself over $22,000 in salary from her campaign in the second quarter.

In Detroit, freshman Rep. Rashida Tlaib faces a stiff Democratic primary challenge from her 2018 foe, Brenda Jones. Tlaib, one of four minority congresswomen in The Squad, has leveraged her celebrity into a massive war chest of over $3 million. (Jones raised less than $170,000 by mid-July.) 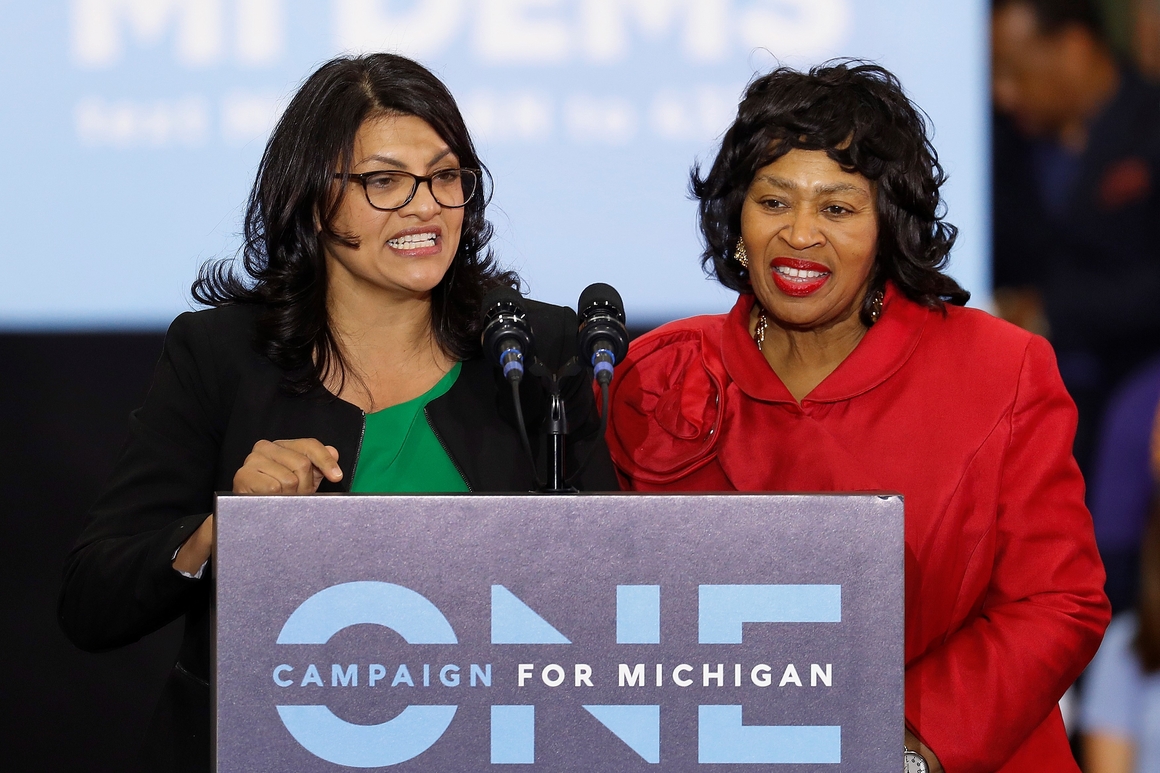 Jones, the Detroit City Council president, is technically a former member of Congress, though she served only a few weeks. She beat Tlaib in the 2018 special election to fill the vacant seat of former Rep. John Conyers (D-Mich.), a race held on the same day as the primary to represent the district for a full term beginning in 2019, which Tlaib won.

House Republicans will narrow crowded fields in three key swing seats, some of which could be crucial to their uphill majority hopes. Five contenders are vying to take on Democratic Rep. Haley Stevens in a suburban Detroit district that Trump carried in 2016. Eric Esshaki, a nurse and lawyer, and Carmelita Greco, a businesswoman, are the best funded — but Kerry Bentivolio, a former one-term representative and Santa Claus impersonator, is also running.

In suburban Kansas City, five Republicans are competing for a chance to challenge Rep. Sharice Davids (D-Kan.). The top contenders are two women: Amanda Adkins, an aide to former Gov. Sam Brownback, and Sara Hart Weir, the former CEO of the National Down Syndrome Society.

Meanwhile, farmer Tiffany Shedd is making another run against Democratic Rep. Tom O’Halleran in a sprawling eastern Arizona district that Trump won in 2016. She is favored to advance, though she still has to get past attorney Nolan Reidhead. (O’Halleran, a Republican-turned-independent-turned-Democrat, has a left-leaning primary challenge of his own from former Flagstaff Councilwoman Eva Putzova.)

The GOP will choose nominees in two open, safe red seats in the Midwest that will further define the future of the party. In Kansas’ sprawling “Big First,” agricultural-heavy district, four Republicans are vying to replace Marshall. The frontrunners: Bill Clifford, a county commissioner and Air Force veteran who seeded his campaign with nearly $600,000; and former Lt. Gov. Tracey Mann, who ran for the seat in 2010 and lost to Tim Huelskamp, whom Marshall ousted four years ago.

McClain has given her campaign more than $1 million and has dwarfed the spending of her opponents. But the conservative Club for Growth is backing Hernandez and released polling from mid-July showing him with a lead.

Senate races in Michigan and Arizona, two states that could also be presidential battlegrounds, will finalize matchups Tuesday. In Arizona, GOP Sen. Martha McSally faces only nominal opposition — while Democrat Mark Kelly, a top party recruit, is running unopposed for the Democratic nomination.

Both McSally and Kelly are among their parties’ best fundraisers, and the race is expected to be hotly contested. But polls show Kelly with a steady, though not insurmountable, advantage.

In Michigan, Democratic Sen. Gary Peters and Republican challenger John James are both unopposed in their respective primaries and are set to face off in one of the few states that could be competitive featuring a Democratic incumbent. James has outraised Peters in recent quarters, though the Democratic incumbent has led in every recent public poll, in some cases by double digits.