Vice President Kamala Harris is looking for leaders to partner with in the region known as the Northern Triangle to curb migration to the United States. There aren’t a lot of options.

The president of Honduras has been tied to the country’s drug-trafficking industry by U.S. federal prosecutors. El Salvador’s president is an authoritarian, whose allies recently dismissed five Supreme Court justices as well as the attorney general to seize control of the top court.

That’s why Harris is leaning on Guatemala as the best hope for making early progress in her efforts to address the poverty, corruption, violence and other destabilizing conditions that are driving thousands of people to migrate north and seek refuge in the United States.

Harris will take her first international trip in office in early June to meet with the presidents of Guatemala and Mexico to discuss issues that past administrations — Democrat and Republican — have tried and failed to address for decades.

For now, the administration is most optimistic about Guatemala as the place to make headway, not because it’s absent of corruption, but simply because it’s willing to talk about the tough issues. And it’s not Honduras or El Salvador.

But former officials and experts warn: If Harris focuses solely on cutting migration, efforts to improve conditions in Guatemala and the rest of the region will fail.

The administration’s focus on Guatemala is “more by default than design,” said Eric Olsen, director of policy at the Seattle International Foundation and an expert on Central America.

“There are serious problems in Guatemala, too, but they can at least work with the president of Guatemala,” Olsen added. Still, he cautioned, “I’m not sure that’s going to work out.”

The Biden administration, for its part, acknowledges that conditions on the ground aren’t right in Honduras and El Salvador at the moment for the vice president to focus there. A senior administration official said the focus at the senior level is on engagement with Guatemala and Mexico, where they are “building out a very positive agenda of collaboration” with the two countries.

Harris has held a call and met virtually with Guatemalan President Alejandro Giammattei and met with community and justice sector leaders from Guatemala in the nine weeks since she was tapped by President Joe Biden to oversee these diplomatic efforts. She has also spoken and met virtually with Mexican President Andrés Manuel López Obrador. But she has not spoken to the leaders of Honduras and El Salvador, or civil society leaders there.

“It is not the right moment, we believe, for [a] very senior-level engagement with El Salvador and Honduras,” a senior administration official said. “Lower level engagements are underway,” the official added, and that’s the level that “we think is appropriate for right now.”

Those lower level talks with leaders in El Salvador and Honduras have largely been led by Ricardo Zúñiga, who in March was named special envoy for the Northern Triangle at the State Department, and Juan Gonzalez, the National Security Council’s senior director for the Western Hemisphere. Both have traveled to the region for meetings with officials there.

There’s a long list of reasons why the White House is being extra cautious about dealing with Honduras and El Salvador’s leaders as part of its initial efforts to tackle root causes of migration.

Honduran President Juan Orlando Hernández, an ally of former President Donald Trump, has been repeatedly linked to organized crime. His brother, a former Honduran congressman, in March was sentenced to life in prison in Manhattan federal court for drug trafficking charges. And U.S. prosecutors allege Hernández was a co-conspirator. He has not been indicted, but experts say it remains very possible given all the evidence.

In El Salvador, the popular 39-year-old President Nayib Bukele has solidified power across the government, while attacking civil society and the press and cozying up to China. In March, Bukele’s allies won an absolute majority in the country’s legislature. And earlier this month, on their first day seated in office, lawmakers aligned with Bukele voted to remove the country’s attorney general and several judges from the Supreme Court.

U.S. officials were quick to raise alarm over the recent actions in El Salvador, but have not taken any kind of action. Harris responded to the vote, which critics regarded as a power grab, by expressing “deep concerns about El Salvador’s democracy.”

“An independent judiciary is critical to a healthy democracy – and to a strong economy,” Harris wrote earlier this month on Twitter. 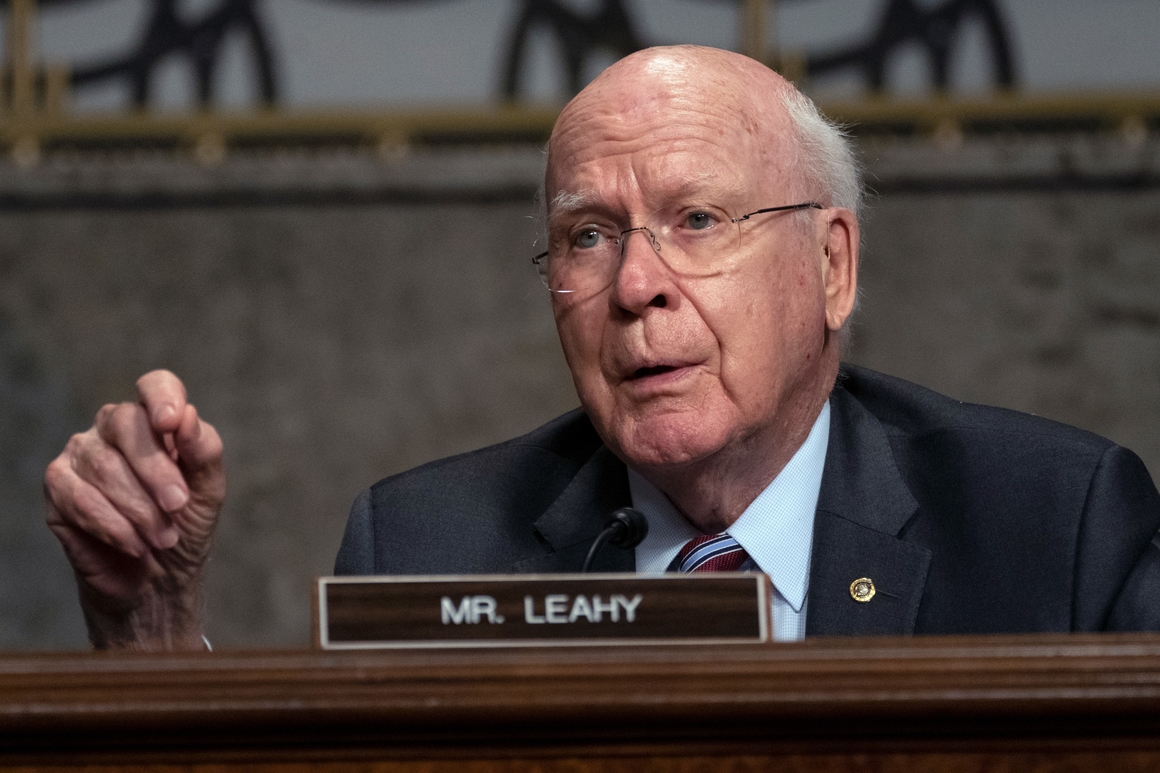 “[T]he choices he and his allies in the Salvadoran Congress make, that are eviscerating El Salvador’s democratic civilian institutions and empowering the armed forces, have consequences for U.S.–Salvadoran relations,” Leahy said in a lengthy statement on Monday.

Last week, lawmakers received a list from the State Department of Central American politicians found to be corrupt. It included 16 current and former politicians from Honduras, El Salvador and Guatemala, including Bukele’s cabinet chief.

Harris, for her part, has been clear in public remarks that fighting corruption is her top priority in the region.

“No matter how much effort we put in — on curbing violence, on providing disaster relief, on tackling food insecurity, on any of it — we will not make significant progress if corruption in the region persists,” Harris said earlier this month at the Council of the Americas’ Washington Conference on the Americas.

Given the widespread corruption in the region, the Biden administration is trying to create a road map that doesn’t rely solely on working with the countries’ governments, but also involves civil society leaders. In his big immigration reform bill, Biden earmarked $4 billion in aid as part of his strategy to address root causes of migration from El Salvador, Honduras and Guatemala. Officials and lawmakers say that money would not only go to the governments and would have strict conditions to ensure it isn’t misused.

Administration officials, lawmakers and experts point to this effort to build partnerships beyond the governments as a major lesson from the Obama years, when Biden was tapped to lead the same diplomatic efforts that Harris now is.

But while the U.S. is trying to work with Guatemalan civil society, the country’s government is seeking to undercut civil society — a reminder that Guatemala also faces systemic corruption and challenges with governance and rule of law. Last week, Guatemala’s top court overturned a ruling that stopped legislation targeting NGOs from becoming law.

And last month, Guatemala’s Congress refused to swear in a judge to its Constitutional Court who is a leading figure in efforts to fight corruption. It was a move a top State Department official said undermined “Guatemala’s commitment to an independent judiciary and addressing systemic corruption.”

Still, Guatemala represents a key opportunity for the Biden administration to have an impact on migration, given the main driver pushing people to leave the country is economic, including the economic impacts of climate change, NSC’s Gonzalez said. “So there’s a lot that can be done to address that.”

That economic migration is relatively easier to tackle than corruption, rule of law and violence.

Harris’ outreach to Guatemala is also driven by the fact that the majority of unaccompanied children coming to the border are from a combination of Guatemala and Honduras, Gonzalez said. In April, more than 17,100 unaccompanied migrant children who crossed the border were taken into U.S. custody, according to Customs and Border Protection figures. Of those, almost 40 percent were from Guatemala.

And experts acknowledge that Guatemala’s openness to engaging on the trickier rule of law issues is helpful, too.

“Guatemala’s willingness to talk about the larger governance and rule of law agenda has made them an easier partner,” said Andrew Selee, president of the Migration Policy Institute, who has advised the administration on these issues. “Now, I don’t know that it means they’ll be better on the rule of law, but they are being very publicly willing to engage.”

So far, the Biden administration has only made small announcements on concrete action or funds for Central America. Following her virtual meeting with Giammattei in late April, Harris announced the U.S. would send an additional $310 million for humanitarian relief and to tackle food insecurity in Guatemala, Honduras and El Salvador. Guatemala also agreed to increase enforcement at its northern and southern borders, according to a statement from Harris’ senior adviser and chief spokesperson Symone Sanders.

The two countries also agreed to open “migrant resource centers” in Guatemala to offer information to those seeking legal pathways for migration or other programs and protections, as well as offer support for migrants returned from the U.S. and other countries. Right now, the Biden administration is kicking out a majority of migrants arriving at the border using a public health order known as Title 42, which was invoked by Trump at the start of the coronavirus pandemic.

A senior administration official said the two countries agreed the first such center would be established in Guatemala City and they hope it will be up and running by the time Harris visits in June. The center is operated by the government and staffed by Guatemalan migration officials, with support from the United Nations High Commissioner for Refugees and the International Organization for Migration, the official said. The goal, the official said, is to build out several resource centers across Guatemala and the rest of the region.

In early April, the U.S. Agency for International Development announced it was deploying a disaster assistance response team to the three countries to help with urgent humanitarian needs.

And earlier this month, following Harris’ virtual meeting with Mexico’s López Obrador, Sanders said the U.S. had developed a package of measures that include trade and business development missions to the region facilitated by the Department of Commerce and the U.S. Trade & Development Agency, and investments through the U.S. International Development Finance Corporation. But the administration has yet to share more details.

The administration has not signaled how comprehensive of an announcement it will make following Harris’ trip. A senior administration official said that as they map out their broader strategy for the region, they’re looking at a combination of short, medium and long-term efforts.

“If we are really committed, then it’s going to require a sustained long-term commitment,” said Adriana Beltrán, director of citizen security at the Washington Office on Latin America.

“We can’t continue to focus on the region when there’s a crisis and then just turn attention elsewhere, because that only really allows for short-term bandage type solutions,” she said. “And that doesn’t achieve the change we want to see in the region.”

Eugene Daniels contributed to this report.