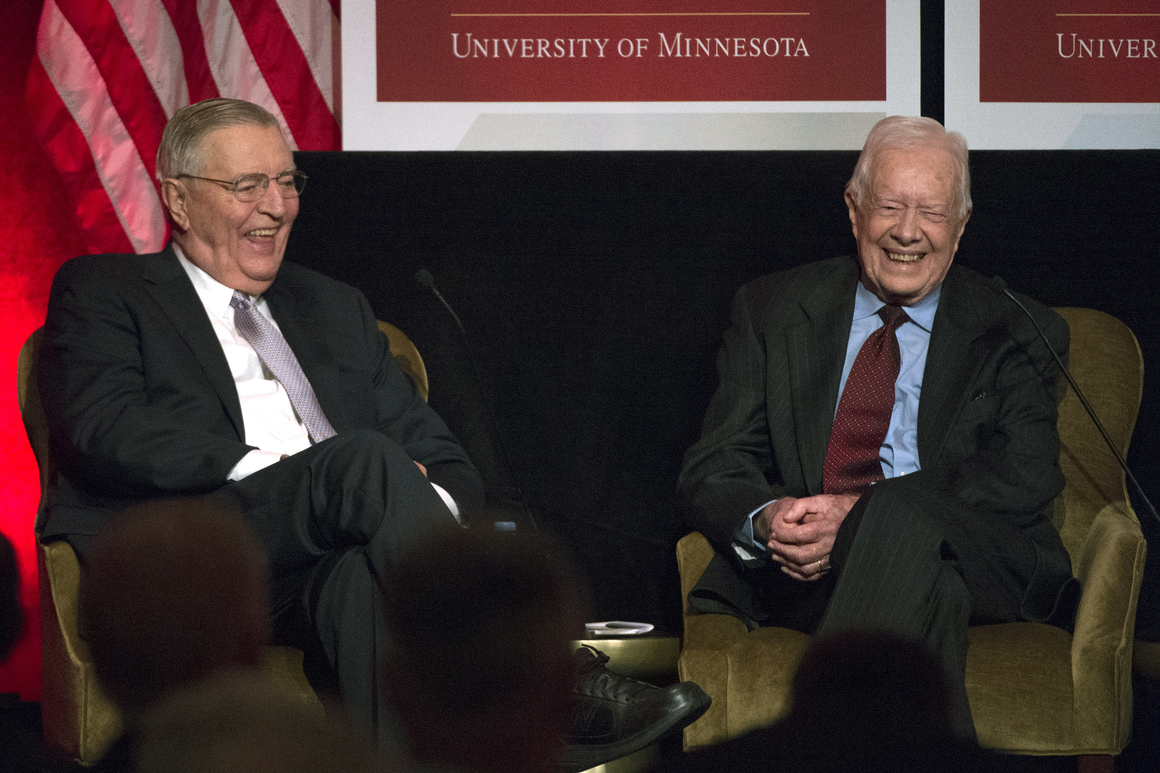 Walter Mondale, the former vice president whose accomplished career was marred by one of the worst electoral shellackings in American history, died Monday.

Mondale, who was also the first presidential candidate to select a woman, Geraldine Ferraro, to be his running mate, was 93. The Associated Press reported his death, citing his family.

The man known as “Fritz” had his seemingly effortless rise in politics halted twice by Ronald Reagan, once in 1980 when the Reagan-Bush ticket stomped Jimmy Carter’s bid for reelection and then, even more forcefully, in 1984, when Reagan obliterated Mondale’s bid for the presidency. Those defeats put an end to the momentum of an accomplished career that included 12 years in the Senate and four as Carter’s uncommonly active vice president.

“Today I mourn the passing of my dear friend Walter Mondale, who I consider the best vice president in our country’s history. During our administration, Fritz used his political skill and personal integrity to transform the vice presidency,” Carter, now 96, said in a statement Monday night.

Though not a particularly polarizing figure, Mondale was a dedicated Democrat, a party loyalist whose fortunes would rise and fall with the party.

“Carter accepted Mondale’s vision,” wrote Ira Shapiro in “The Last Great Senate: Courage and Statesmanship in Times of Crisis,” “of a vice president as a senior adviser, gave him an office in the West Wing, and made him probably the most influential vice president in history up to that time and a model for future vice presidents.”

His official biography on the U.S. Senate web site said: “As a senator, vice president, and presidential candidate, Mondale played a transitional role in the Democratic Party, seeking to bridge the generational and ideological divisions that racked the party during and after the 1960s.”

A Minnesotan through and through, Walter Frederick Mondale’s biography reads like a map of his home state: He was born in Ceylon in Jan. 5, 1928, and moved to Elmore. He attended Macalester College in St. Paul, then ultimately graduated from the University of Minnesota. After a stint in the Army during the Korean War, he graduated from the University of Minnesota’s law school on the GI Bill.

Mondale had an interest in politics from a young age and his rise in it was tied to that of fellow Minnesotan Hubert H. Humphrey.

He helped organize students for Humphrey’s Senate campaign in 1948, working for campaign manager Orville Freeman. After managing Freeman’s gubernatorial victory in 1960, he was appointed the state’s attorney general. In 1964, he helped Humphrey manage a volatile situation at the Democratic National Convention in Atlantic City, a heated dispute over the racial composition of Mississippi’s all-white delegation.

Though the resolution of the Mississippi situation was not particularly satisfying to anyone, the Democratic Party held together and Humphrey ended up Lyndon B. Johnson’s vice president. At that point, Mondale was appointed by Gov. Karl Rolvaag to fill Humphrey’s seat in the U.S. Senate. Mondale went on to win full terms in 1966 and 1972.

As a senator at the time of LBJ’s “Great Society,” Mondale followed in the tradition of Humphrey and Eugene McCarthy, a dyed-in-the-wool New Deal liberal with ties to the progressive traditions of the Minnesota-Wisconsin region.

“Mondale had been an impressive senator in his own right,” wrote Shapiro in his 2012 book. “He had a fine legal mind, loved to legislate and got along well with colleagues in both parties.”

Among the achievements Shapiro cited were his efforts on behalf of civil rights legislation, as well as efforts to aid migrant farm workers. He also was part of the panel led by Sen. Frank Church (D-Idaho) that investigated the secret activities of the FBI and CIA.

In 1968, Mondale helped chair Humphrey’s ill-fated presidential campaign; after Humphrey’s defeat, he changed his stance on the Vietnam War, announcing his opposition in a speech at Macalester in October 1969. 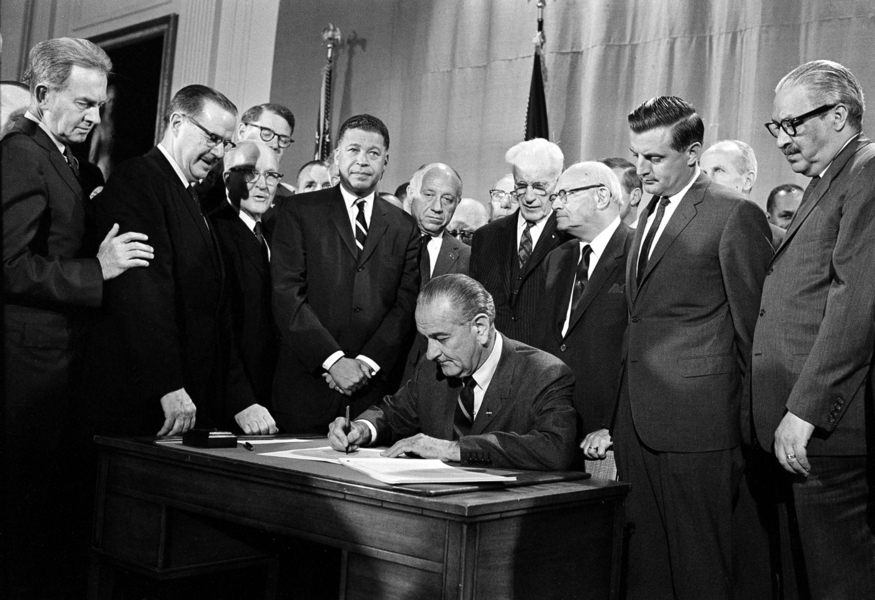 Heading into the 1976 election season, Mondale was expected to join a wide-open Democratic field in seeking the presidency. He opted out but ended up being chosen by Jimmy Carter as his running mate, the so-called “Fritz and Grits ticket.” They eked out a narrow win over President Gerald Ford and Kansas Sen. Bob Dole in November.

At the time, much was made of the fact that Carter clearly wanted Mondale’s counsel and presence, something that definitely had not been true of past presidents — Mondale even had his own office in the White House. Mondale’s wife, Joan, also attained more prominence than typical for a “second lady.”

“Our relationship in the White House,” Mondale was quoted as saying in his Senate website biography, “held up under the searing pressure of that place because we entered our offices understanding — perhaps for the first time in the history of those offices — that each of us could do a better job if we maintained the trust of the other. And for four years, that trust endured.”

As a former senator, Mondale also spent much of his time fighting for the president’s legislative priorities on the Hill. He also was a key participant in the negotiations between Prime Minister Menachem Begin of Israel and President Anwar Sadat of Egypt that led to those two longtime enemies signing the historic Camp David Accords.

He also worked to end the refugee crisis that had engulfed Southeast Asia in the wake of decades of war and oppression. “Let us honor the moral principles we inherit,” Mondale told a United Nations conference on the refugees in July 1979. “Let us do something meaningful — something profound — to stem this misery. We face a world problem. Let us fashion a world solution.“

Still, Carter’s popularity steadily eroded during his presidency. After Carter was routed by Reagan in November 1980, Mondale was widely considered the Democratic front-runner for 1984 and he entered the race Feb. 21, 1983.

In hindsight, it may seem like the Democrats were doomed to be crushed by Reagan in 1984 but that was not clear at that time. Reagan’s approval rating had dipped to 35 percent in January 1983 and was still south of 50 percent during 1984. In late July, James Reston wrote in the New York Times that Mondale — having just made history by choosing Ferraro — was holding a slight lead over Reagan and seeking to consolidate it by bringing in new voters.

“On the outcome of this mobilization struggle may depend victory or defeat a hundred days from now in November,” Reston wrote.

Defeat it was — a lopsided one.

He had gained the nomination by beating back a surprisingly strong challenge from Colorado Sen. Gary Hart, a relative newcomer to the national stage. Just when it looked like he might coast to victory, Mondale had lost to Hart in New Hampshire. “Hart became the unofficial candidate of the ‘not-Mondale‘ Democrats — voters who were younger, more educated, more affluent, whiter, and disenchanted with the orthodoxies of the Democratic Party,“ wrote Jeff Greenfield in 2007.

As the primary season wore on, it became a three-man battle, with Mondale battling Hart and the Rev. Jesse Jackson, the nation’s first prominent African American candidate. Mondale, who was perceived as the establishment candidate, may not have had the most enthusiastic supporters of the three, but ultimately he had the most delegates.

“Vice President Walter Mondale,” Hart said of him Monday night, “was a statesman before he was a politician. He represented the best qualities of the Democratic Party — largeness of vision, concern for those in need, the national interest before special interests, and anticipation of the future.”

On July 12, 1984, Mondale made history by announcing he had selected Ferraro, a three-term congresswoman from New York, as his running mate. He said: ”Our founders said in the Constitution, ‘We the people’ — not just the rich, or men, or white, but all of us.” It was reported that he actively sought to make history with this selection, having also considered African-Americans and at least one Hispanic, among other candidates.

Enthusiasm greeted the choice of Ferraro as the first woman on a major party ticket, though her selection became something of a liability, when issues came up during the campaign about her husband’s finances.

Alluding to a then-popular hamburger ad, Mondale had used the phrase “Where’s the beef?” during the primary season to mock Hart as a pretty face with lightweight policies but efforts to transfer that slogan to Reagan did not take. Reagan’s team countered with ads declaring a rebirth of American greatness, saying it was “Morning Again in America.” The Republicans also unleashed “Fritzbusters,” seemingly omnipresent young campaigners making use of the then-popular “Ghostbusters” theme. And there was simply no getting around his connection to the Carter administration.

“It wasn’t malaise we suffered from,” Jeane Kirkpatrick said in her memorable GOP convention speech, “it was Jimmy Carter — and Walter Mondale.”

For his part, when he tried to pin down Reagan on specific issues in their debates, Mondale came off as wonky and awkward. Reagan, then a feisty 73, even zinged Mondale about his age: “I am not going to exploit, for political purposes, my opponent’s youth and inexperience.” 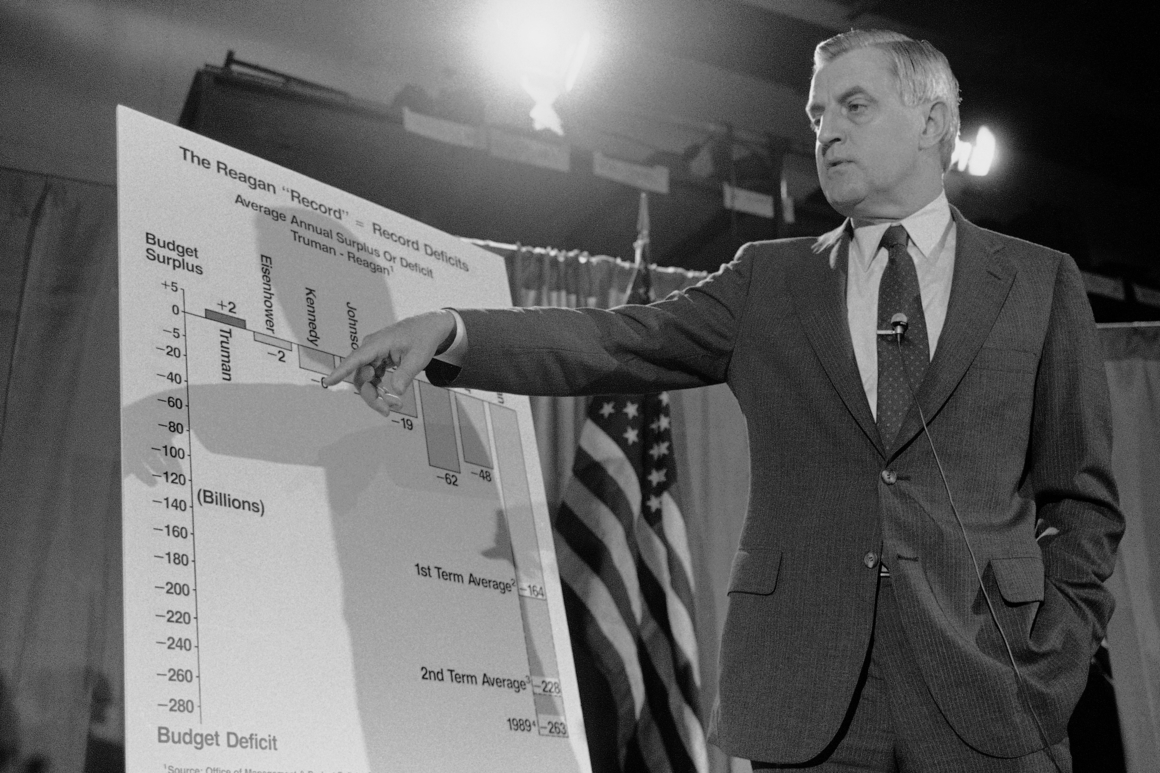 The 1984 results were a landslide of epic proportion, even more lopsided than the defeats suffered by Republican Barry Goldwater in 1964 and Democrat George McGovern in 1972. Mondale carried only Minnesota (barely) and the District of Columbia, losing by 525 electoral votes to 13. Reagan drew almost 17 million votes more than Mondale, and only in seven states (Massachusetts, Rhode Island, Maryland, Pennsylvania, Iowa, New York, Wisconsin) was the Democrat’s margin of defeat less than 10 percentage points.

“Mondale’s fall campaign was as doomed as McGovern’s 12 years earlier,” wrote Bruce Miroff in “The Liberals’ Moment: The McGovern Insurgency and the Identity Crisis of the Democratic Party.“

Miroff added: “Riding an upsurge in popularity and a wave of nationalism, Reagan’s team devised a feel-good theme for the president that easily routed the drab Mondale.”

After 1984, Mondale did not attempt a comeback, though he stayed on the public stage with time at the National Democratic Institute for International Affairs and then, under President Bill Clinton, as ambassador to Japan. In 1998, he served as Clinton’s special envoy to Indonesia.

Under tragic circumstances, Mondale did jump back into the electoral fray in 2002. Democratic Sen. Paul Wellstone, his wife, his daughter and five other people were killed in a crash of his campaign plane Oct. 25.

Members of Wellstone’s campaign, including his son, recruited the former senator to take Wellstone’s place on the Minnesota ballot, but Mondale had inherited a strong opponent in Republican Norm Coleman, and the campaign-style feel of Wellstone’s televised memorial damaged the standing of the state’s Democrats. Less than two weeks later, Coleman prevailed by 3 percentage points; it was Mondale’s first defeat in Minnesota since he lost out for class president as a high school senior.