The Coast Guard is urging the Senate Commerce Committee to approve two nominations for promotion to one-star admiral that have stalled since May over concerns regarding the officers’ social media posts and leadership decisions.

The officers — Capt. G. Todd Prestidge and Capt. Melissa Rivera — were among seven officers who were nominated to become one-star admirals in the Coast Guard, but the committee sidelined their promotions in May over the issues while approving the other officers. The holdups, along with concerns from committee members, have not been previously reported.

In 2015, Prestidge, who was commanding officer of the Coast Guard Training Center in Cape May, N.J., at the time, retweeted a post that appeared to call for shooting illegal immigrants. Also that year, he tweeted that Democratic members of Congress were “embarrassing themselves.”

Rivera, a former commandant of cadets at the Coast Guard Academy, did not thoroughly address or consistently discipline cadets for racist harassment and discrimination during her tenure between 2015 and 2018, according to a June Homeland Security Department Office of Inspector General report.

Senate Commerce ranking member Maria Cantwell (D-Wash.) said in May at the nomination hearing that she had “serious concerns” about the two officers and that she “thinks we need to more thoroughly vet some of these nominees before we move forward on their final passage.”

Along with Cantwell, Democratic Sens. Tammy Duckworth (Ill.) and Richard Blumenthal (Conn.) also voted no on the promotions.

“I have significant concerns about the Coast Guard Academy’s failed response to reports of several instances of racial harassment, which occurred while Captain Rivera held a position of direct leadership at the Academy,” Blumenthal said in a statement to POLITICO.

He also called Prestidge’s social media posts “troubling” and added that “future leaders of the Coast Guard must be held to the highest of standards.”

Yet the Coast Guard “continues to support both military officers and is seeking prompt and favorable consideration of their nominations,” a Coast Guard spokesperson said in a statement.

Rivera and Prestidge did not respond to a request for comment.

Prestidge’s tweets were flagged by the committee after he was nominated for promotion, and his account has since been deleted. 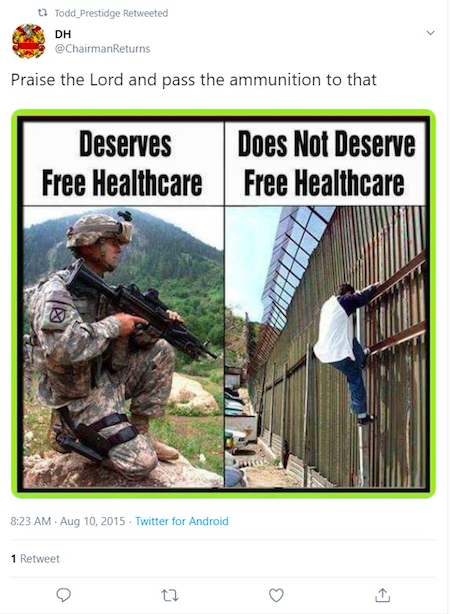 But screenshots shared with POLITICO depict a cartoon showing a man scaling a border fence under the caption “Does not deserve free healthcare” and a tweet saying “Praise the lord and pass the ammunition to that.” Prestidge, now a commanding officer in the Coast Guard’s Personnel Service Center, retweeted the image and comment.

In a second case, Prestidge appears to have been watching Israeli Prime Minister Benjamin Netanyahu’s March 2015 speech to Congress in which he criticized the Iran nuclear deal.

A committee aide defended the officer, saying the panel concluded the tweets did not violate Coast Guard policy and that the Coast Guard also reviewed the posts. The aide spoke on condition of anonymity to discuss internal matters.

The committee also took notice that Rivera did not discipline cadets when investigations of racist harassment incidents turned up violations of Coast Guard policy and cadet regulations during her tenure at the Coast Guard Academy. As commandant of cadets, Rivera had “broad and discretionary powers to discipline Cadets,” according to the Regulations of the Corps of Cadets.

The academy did not charge or discipline a cadet who repeatedly referred to a first-year cadet as a “n—–” in 2016, and in another incident that year, a different cadet was retained and did not receive any punishment for “joking” to an incoming cadet, “I heard if you go to the Muslim Faith Service, that they teach you how to make bombs,” according to the DHS OIG report.

An incident involving two second-year cadets who posed in front of a Confederate flag and posted it on social media in 2017 was also mishandled, the OIG found. For years, the academy has wrestled with racism and equity concerns, especially for Black cadets, as racism persists at other military academies.

According to her LinkedIn, Rivera in May 2020 was transferred to work at Force Readiness Command, which oversees training and leadership education for the service, including how bullying or sexual assault training is delivered.

In answers to written questions from the committee asking if she herself has ever been accused of sexual harassment or discrimination, Rivera summarized seven incidents between 2012 and 2019 that were filed while she was in various leadership positions.

The Coast Guard said all of the cases involving Rivera are closed, “without a finding of discrimination or any wrongdoing against” her.

The Senate committee aide also defended Rivera’s conduct throughout her career, arguing that the harassment claims fell outside of her direct chain of command.

“All of the claims against Rivera, many of which involve incidents that certainly happened, but that she was two, three, or even four officers removed in the chain of command, away,” the committee aide said.

If the nominations are not approved in this Congress, they would need to be resubmitted in the new Congress next year. It’s unclear whether the service plans to do so if the nominations expire.

It’s unusual for committees to stall officer promotions, which typically sail through by unanimous consent.