MIAMI — After months of dire warnings that Donald Trump is making gains in this liberal bastion, Joe Biden is finally listening to South Florida Democrats.

For much of the campaign, Miami Democrats have been sounding the alarm at Biden’s relatively tepid support among Democratic-leaning, non-Cuban Hispanic voters here and throughout Florida. The problem was compounded by Trump’s outsized support among Cuban Americans.

Without a big winning margin and high turnout in populous Miami-Dade County, Biden would have little chance of winning the state. So over the past two months, Biden’s campaign responded by embarking on a hiring spree in South Florida, giving more local-press interviews and, in combination with outside groups, pouring $23 million into TV commercials in the Miami media market, according to data from the tracking firm Advertising Analytics.

Ad Analytics data show that Biden’s campaign significantly outspent Trump in Spanish-language television ads in Florida over the last five weeks — spending a total of $3.1 million to Trump’s $2 million — and is blanketing African American newspapers and Jamaican and Haitian radio stations with ads.

In recent weeks, the Biden campaign has been hosting multiple car caravans for supporters to flood the streets of Miami in recent weeks — one of the tactics candidates have taken to in place of in-person rallies.

Biden himself appeared in Miami today for the first time in over a year, making stops in Little Havana and Little Haiti ahead of an NBC Town Hall on Monday night to pay homage to two crucial diaspora voting blocs in Trump’s must-win state.

“People just need to see Biden in person and see he’s not the boogeyman he’s presented as in many WhatsApp chats in Miami,” said Carlos Odio, a Miami native and co-founder of Equis Research, a Democratic firm that polls and studies Latino voters in Florida and other battleground states.

“There’s a lot of voters who want to vote for him and want to have something to hook their hats on, especially to overcome the cross-pressure from what they’re getting on the other side,” he said.

Biden pledged in Miami that he wouldn’t stay gone for long.

“The bad news for you is I’m coming back,” he joked at the end of his speech in Little Haiti, which needed some extra attention after Haitian-American leaders felt their community — which typically votes Democrat — was snubbed by Biden’s campaign when his running mate, Sen. Kamala Harris, didn’t meet with them during a recent visit.

A new survey conducted by Miami-based pollster Fernand Amandi released Monday shows that the mad dash could be working — Biden has marginally improved his standing in the county, especially with Cuban Americans.

The poll, by Bendixen & Amandi International and the Miami Herald, shows Biden now leads Trump by 20 percentage points in Miami-Dade, a county that Hillary Clinton carried by nearly 30 points four years before. Other Democratic and Republican polls shared with POLITICO confidentially also show Biden with a roughly 20-point lead in the county.

Biden’s standing represents an increase of three percentage points since September, fueled by a net 12-point shift in Biden’s favor with Cuban Americans. Trump still leads Biden, 61 percent to 35 percent, among Cuban Americans. Among non-Cuban Hispanics in the county, Biden leads by 61 percent to 29 percent in the poll, a net shift of 5 points.

“These gains with Cuban voters, especially if he can score additional inroads with non-Cuban Hispanic voters, mean he’s well positioned to carry Florida in November, especially if he overperforms with white voters in the state compared to Hillary in 2016,” Amandi said.

Amandi said Biden’s magic number to hit is 40 percent with Cuban Americans in the county, provided he can still do well with non-Hispanic white and older voters in the rest of the state. Recent polls suggest Biden is ahead overall in Florida, but his leads are within the margins of error for the surveys. 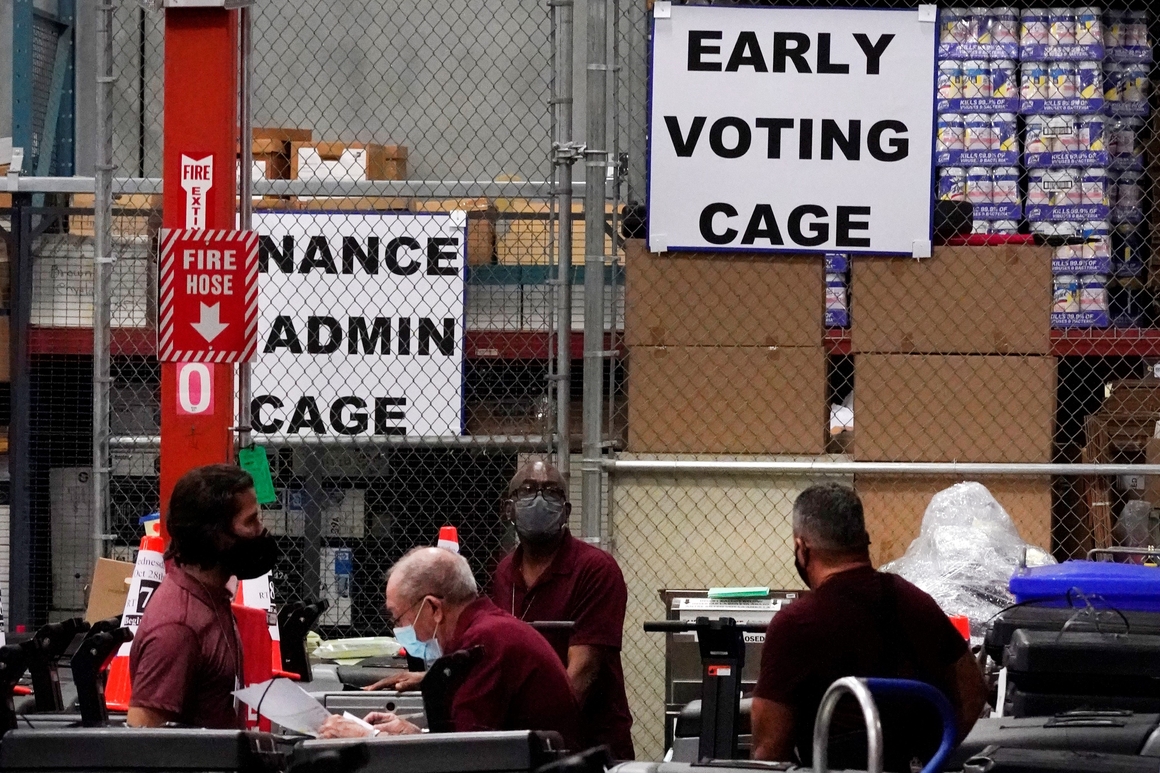 Still, doubts persist about just how much more traction Biden can gain among Cuban Americans after the former vice president’s campaign was locked down so strictly because of the pandemic that it didn’t even door-knock.

“These last-minute attempts are often ultimately futile,” said Guillermo Grenier, a Florida International University professor and pollster, who conducts the state’s highly watched Cuba poll. That poll found Trump in a dominating position over Biden in the community.

“Is it too late? It might be. But it’s better to show up late than never at all,” Grenier said.

What surprised Grenier and many Democrats in the poll was that relatively new arrivals from Cuba who immigrated to the United States starting in 2010 were registering Republican over Democrat by a whopping 76 percent to 5 percent. The balance registered as independent or third-party voters.

Biden partisans have pointed out that the poll, part of an in-depth study conducted between July and August, was dated by the time it was released in October. Grenier, who supports Biden, said the survey consistently showed that 90 percent of people had their minds made up and that the numbers are still relevant today.

Unlike Biden, Trump has made outreach to Cuban Americans a virtual obsession since 2016, when he got relatively soft support from the community after a bruising primary campaign against Sen. Marco Rubio, a son of the exile community.

As president, Trump has cracked down on Cuba and made his administration and campaign a constant presence in Miami and the overwhelmingly Cuban city of Hialeah. He also reached out to conservative Hispanics drawn to his saber-rattling at socialist governments and movements in Latin America, particularly Venezuela, Colombia and Nicaragua.

“The truth is Trump has done an amazing job in creating a proximity between Hialeah and Washington that has never existed. Now, Biden has to do the same,” said Ric Herrero, a Miami native and executive director of the Cuba Study Group, a pro-Cuba engagement group in Washington.

Herrero said there’s no substitute for Biden showing up: “He’s really got no way to go but up by showing up in Miami and making his case directly to voters there.”

One reason Biden had little presence on the ground was the pandemic: his campaign conducted much of its business virtually out of a desire to avoid exposing voters or staff to coronavirus. Biden’s campaign was also more focused on the Midwest than Florida, an expensive state where the once-cash strapped Democrat wasn’t sure he could fully compete.

But then the money washed in, and poll after poll showed Biden marginally ahead of Trump in Florida. Biden’s campaign and outside groups then made Florida, and Miami, a focal point.

“[Monday’s Miami] stop is super important in showing that he’s listening,” said Daniela Fernández, national finance director for the Pro-Biden Latino Victory, who has been heavily involved in Florida politics.

Fernández praised Biden’s campaign for working to mobilize other voting blocs in South Florida — not just Cuban Americans, pointing to recent car caravans for other Latino groups such as “Venezolanos con Biden” and “Dominicanos con Biden.”

Trump, for his part, has long hinged his South Florida campaign on capturing the reliably Republican Cuban vote and increasing his share of the Venezuelan vote. Much of his Latin America strategy in the White House has been centered around Cubans, Venezuelans and Nicaraguans — and has been influenced by Miami Cubans, like Rubio and Rep. Mario Diaz Balart.

But in Florida, where elections are won at the margins and Democrats have a more far-flung coalition they need to unify, many in the party believed that Haitian-Americans relatively weak support for Clinton helped cost her in the state.

Determined to learn from that experience, Biden’s campaign has made a big push for voters of Haitian American and Black West Indian descent in Florida. Part of that effort is showcasing Harris’s Jamaican-Indian heritage, which has excited the Caribbean American community.

Biden’s Little Haiti visit, where he spoke at the Little Haiti Cultural center, was a show of respect, campaign aides said.

“It’s wonderful that he’s coming because it’s recognition that the Haitian community as a battleground community that matters and is increasingly more powerful,” said Gepsie Morisset-Metellus, co-founder and executive director of the Haitian Neighborhood Center Sant La, who is running for a county commission seat.

Biden’s speech was limited to the press and public due to social-distancing requirements. According to a press pool report, he spoke about the plight of Haitians after the 2010 earthquake devastated the country and zeroed in on Trump’s immigration policies.

“The most important thing we wanted to make clear is temporary protected status is guaranteed,” Biden said. “This is not the time to lift it.” A Catholic like many Haitians, Biden also spoke about his faith and said Haitians were part of the American experience

“There’s no quit in America,” he said. “And there’s clearly no quit in the Haitian community.”

In contrast to that visit, Biden was met with protests in Little Havana before his speech at the Jose Marti Gym. Biden’s guests included business and community leaders who were of Cuban, Venezuelan and Puerto Rican descent.

The chair of the Miami-Dade Republican Party, Nelson Diaz, pointed to the passion of Trump’s supporters in Little Havana as evidence that the polls just aren’t capturing the enthusiasm for the president.

“If the former vice president is gaining on President Trump in the Hispanic community here, you sure don’t see it on the street,” he said.