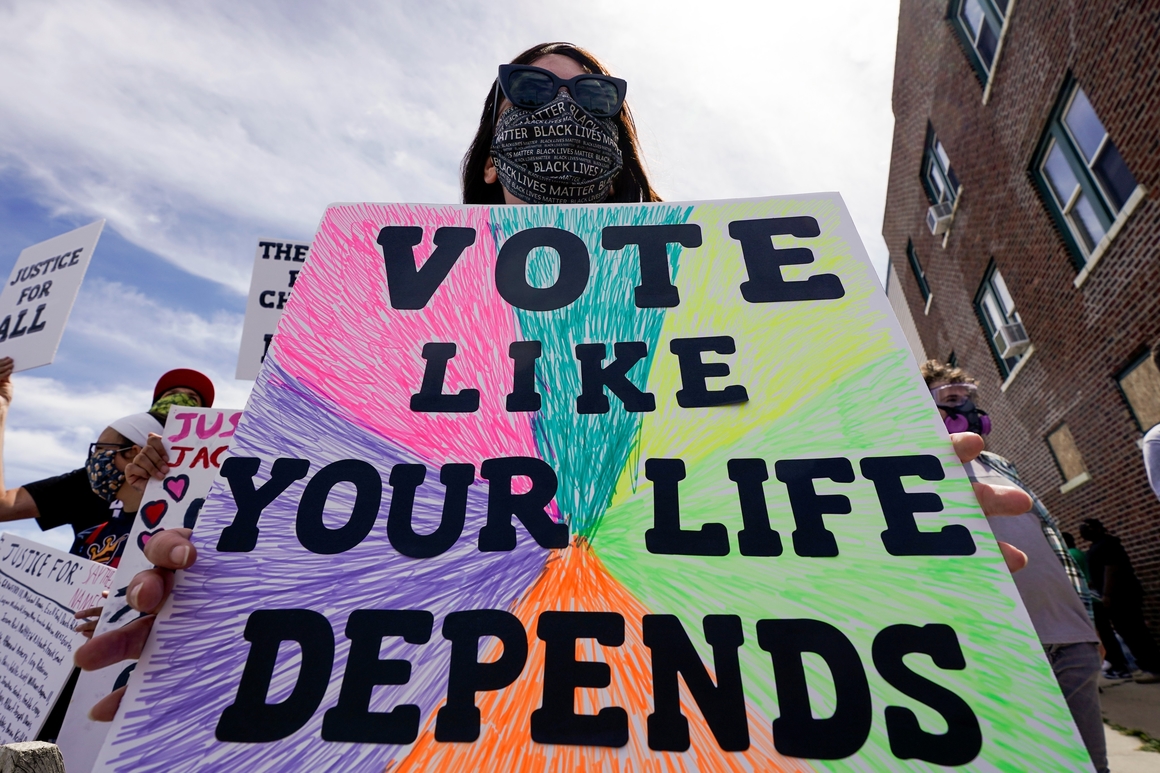 The chaotic scenes in Kenosha, Wis. and Portland, Ore., are redefining the contours of the presidential race — shifting the immediate debate over how to quell the clashes, who should own the unrest and which candidate is better suited to lead the nation through strife.

Donald Trump, who’s planning to visit Kenosha on Tuesday, is claiming the mantle of law and order even as he stokes conflict between protesters and his supporters. Trump is trying to take credit for restoring order by loudly calling for an influx of National Guard troops and painting Democrats as too fearful of alienating their base to denounce violence.

Joe Biden last week called for a halt to the violence, though it took him longer than many Democrats wanted. The Democratic nominee decided over the weekend that he would not travel to the pivotal battleground state on Monday ahead of Trump’s visit. Instead, the Biden campaign plans to ramp up messaging that Trump’s rhetoric has only inflamed hostilities on the streets, beginning with a speech in Pennsylvania Monday.

“It’s a very difficult argument to make when he is president of the United States that the unrest and chaos that’s happening on the ground is somehow not his responsibility,” Deputy Campaign Manager Kate Bedingfield told POLITICO. “He owns it. He’s the president of the United States and he owns it. People are seeing a president who is failing to lead and that will be a big focus for us as we move forward.”

“We will continue to put this at his feet and hold him accountable for it because it’s hard to make a law and order argument when you’re an incumbent.”

The balancing act over the riots and police misconduct marks a new, intensifying phase of the election. Both campaigns are preparing for a burst of activity: Biden plans to break his months-long hold on travel to swing states in the coming weeks, with stops expected initially in Wisconsin and Michigan in addition to Pennsylvania. He’s also looking to appear in Minnesota and Arizona soon.

But even as he and his running mate Kamala Harris cautiously plot a return to the road — a trip to Wisconsin could come as soon as later this week — some Democrats are expressing frustration that the ticket declined to visit Kenosha in the immediate aftermath of the Jacob Blake shooting. Some party members were already irritated that Biden did not give his convention speech in Milwaukee last week.

“Biden needed to be here already. Democrats largely are not even part of the conversation here,” said Terrance Warthen, who is active in Kenosha County government and a former co-chair of Our Wisconsin Revolution, which sprang out of Bernie Sanders’ 2016 run.

Peaceful protests following the police shooting of Blake, a Black man, gave way to violent unrest in Kenosha. Looters and rioters — many of whom came from outside the city — contributed to warzone-like scenes that Trump pointed to in his calls for a crackdown. A white teen from Illinois who traveled to Kenosha is charged with killing two people during the protests.

The killings enraged local activists after video showed the suspect, Kyle Rittenhouse, armed with a military-style, semi-automatic weapon, walking by police and leaving the scene after the shootings.

Warthen, who held a peaceful demonstration after the Blake shooting, said Democrats in the state are chagrined over how local leaders handled the riots. While Gov. Tony Evers had deployed some National Guard troops a day after the Blake shooting, he was viewed as moving too slowly and quickly became entangled in a public battle with the president, with Trump claiming that Evers turned down federal assistance.

Democrats fear that Trump is diverting attention from his handling of the pandemic and the economy to the violence in Wisconsin and Portland. Biden himself has pointed to remarks by Trump advisers suggesting the violent clashes make for a favorable backdrop for the incumbent.

Biden’s attempt to quell the violence from afar is only boosting Trump in the must-win swing state, some Wisconsin Democrats contended.

Biden aides contend they are running an innovative campaign in Wisconsin, with TV ads in all five major media markets and an expansive virtual organizing program.

In a first for a recent Democratic presidential nominee, Biden based his Wisconsin campaign in Milwaukee — a place that, with more voter engagement, likely would have swung the state to Hillary Clinton. But Trump had ground forces in place in Wisconsin and other battleground states in the summer of 2019, while Biden was still in the early stages of the Democratic primary. Trump and Pence have both visited Wisconsin in recent weeks, and the president has chided Biden for not showing up in Milwaukee, the Democratic convention host city, to give his nomination speech.

Biden had planned to return to the campaign trail by hammering Trump’s performance on the coronavirus, arguing that his failures have cost lives and devastated the economy. Bedingfield said the campaign will still draw attention to Trump’s leadership on Covid-19 and the economy. But events on the ground have dictated that the Democratic nominee instead focus on racial tensions and civic unrest.

Before the shootings in Wisconsin and Oregon, Biden had planned a series of events in and around Delaware this week, and then to hit the road after Labor Day. But the campaign was forced to shift gears. Last week, Biden cut a video condemning the violence, then made unscheduled appearances on cable news in which he pleaded for calm but also attempted to put the onus on Trump, whom Biden accused of inflaming tensions.

Biden continued the strategy into the weekend, with an address to the National Guard and via surrogates on the Sunday shows. He issued another statement Sunday afternoon condemning the violence in Portland.

For months, the contrast of Biden’s caution with Trump’s Twitter tirades reinforced Democrats’ claims that the president never took the virus seriously enough — and never would. Biden’s constant presence in his basement over the summer was mocked by Trump but seemed to help the candidate with voters who welcomed the Democrat’s restraint.

“He’s trying to model what national leadership should look like. It’s not about yourself, it’s about protecting others,” said Michigan State Senate Minority Leader Jim Ananich, a Democrat from Flint. “It’s been the reality TV star versus someone acting responsibly.”

Trump and Vice President Mike Pence, by contrast, have been hitting battleground states. Trump’s campaign said they have seen the benefits of the president’s visits to places like Arizona, where a recent event by Trump brought a flurry of local media coverage.

Biden needs to “show that he cares about Arizona, and that he’s attentive to Arizona,” said Paul Bentz, a Republican pollster in the state. “If Biden wants to win Arizona, he has to come here.”

As polls have shown modest tightening in the race, Biden surrogates and Democratic strategists said in interviews that they’ve been urging the campaign to be more explicit in linking Trump’s early failures on coronavirus with the sluggish economy and high jobless rates.

With Trump still polling relatively well compared with Biden on the economy, some of these Democrats said they fear a scenario in which Trump gains ground as voter concerns about the virus diminish and worries about their finances grows.

As for travel amid the pandemic, many Democrats think the dearth of in-person events has hurt Trump given how much he feeds on the energy of crowds. They worry that no matter what Biden does, Trump’s return to the road will be a bigger boon to the Trump campaign. At a stop Friday in New Hampshire, the president continued the barrage, calling Biden no match for the left-wing herd “marauding through our cities.”

The concerns in Wisconsin have bubbled up to the Biden campaign. In a Friday evening fundraiser, Harris was asked about the destruction in Kenosha, as well as Portland and Minneapolis, where police were charged in the death of George Floyd.

“Trump and the RNC are preying on legitimate fears to lie about defunding police, destroying suburbs, and more, labeling the vice president as `Joe the destroyer,’” one questioner said to Harris. “What’s our strategy to cut through all of this and communicate a simple, clear understandable message that will resonate with undecided voters?”

Harris said the conversation around ending police violence and creating a more equitable society was a long time coming yet acknowledged that “the fear tactics by Trump and the Republican Party are going to work” with some voters.

“If we can just stay focused on the truth and speaking truth,” she said, “I think people will respect it even if they don’t want to hear it.”