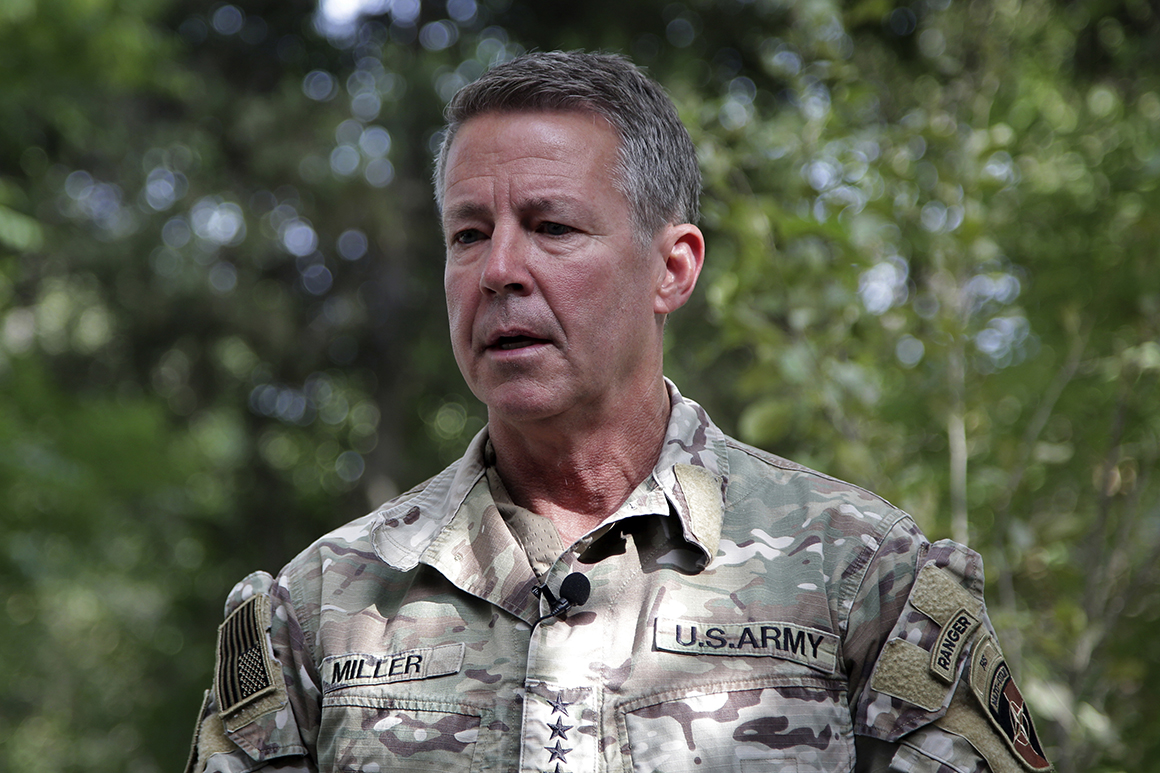 As the top general in Afghanistan stepped down on Monday, a new phase of the conflict began, one in which the U.S. military will end its on-the-ground support to the Afghan security forces and shift to fighting terrorists from the air.

Gen. Scott Miller on Monday handed over responsibility to Gen. Frank McKenzie, the head of U.S. Central Command, in a ceremony in Kabul. McKenzie, from his headquarters in Tampa, Fla., will oversee the mission in Afghanistan and be able to authorize airstrikes against the Taliban in support of the Afghan security forces through the end of August, according to a defense official with knowledge of the plans.

After Aug. 31, the deadline President Joe Biden has named for the United States to officially end the 20-year war, all such airstrikes will cease, the official said. Instead, U.S. forces will focus on fighting terrorist groups such as al Qaeda and ISIS from bases outside Afghanistan.

“It’s not the end of the story,” McKenzie reportedly said on Monday, speaking in Kabul after Miller relinquished command. “It’s the end of a chapter.”

The Pentagon is still working out the details of where to base forces that must fly into Afghanistan to conduct counterterrorism operations after the withdrawal is complete. Currently, the military is conducting operations from faraway bases in the Middle East and ships in the Persian Gulf. The Biden administration is in discussions with several central Asian countries to potentially base U.S. troops and aircraft in the region to gain a closer access point to Afghanistan, but so far no plans have been finalized, the official said.

In the meantime, Rear Adm. Peter Vasely, the former director of operations for the Defense Intelligence Agency, will take charge of the small-scale operation on the ground in Afghanistan. This includes a force of roughly 650 security troops charged with safeguarding the U.S. Embassy and the Kabul airport. Vasely will report to McKenzie.

Like Miller, Vasely has a background in the special operations community. He was once a member of SEAL Team 6, the shadowy Navy unit known for killing al Qaeda leader Osama bin Laden.

While Biden has said the U.S. withdrawal will officially be complete at the end of August, Miller’s departure marks one of the last steps in the ground component of the process.

The news comes as the Taliban continue to make significant territorial gains across the country and western officials worry that the government in Kabul will soon fall.

The group has taken control military of key districts throughout the country in recent weeks and is now cutting off revenue sources to the Afghan government by seizing strategic border crossings, including with Iran and Turkmenistan.

As of Monday, the Taliban controls 204 of Afghanistan’s 407 districts and contests another 124 districts, according to the Foundation for Defense of Democracies, which closely tracks the conflict.

Despite the Taliban’s gains, Biden last week said the fall of Kabul was “not inevitable,” and said it’s now up to the Afghan military to protect the government as the U.S. leaves. But his assessment was more optimistic than those of his military commanders, including Miller, who recently warned that Afghanistan could soon fall into “civil war” once the U.S. departs.

McKenzie again acknowledged the threat from the Taliban on Monday, yet he also predicted they will have difficulty taking Kabul.

“I think, certainly, the provincial capitals are at risk, and we’ll see how that shakes out over the next few weeks,” McKenzie told reporters traveling with him, according to reports. “I think the Afghans are determined to fight very hard for those provincial capitals.”

Biden also announced last week that the administration will begin flights to relocate the thousands of Afghan interpreters to a location outside the continental U.S. to await the approval of special immigrant visas. He did not specify which locations the refugees would move to.

However, lawmakers who have pushed the administration to evacuate these Afghans criticized the plan as too little too late. Rep. Michael Waltz (R-Fla.) told POLITICO in an interview that Biden’s promises amounted to “a lot of rhetoric.”

“We’re talking a few thousand here who have worked with Americans for years and been extensively vetted already. It makes no sense. It’s infuriating,” Waltz said. “Time has run out, and these people are being hunted down as we speak.”